Traveling With T purchased this for her own personal reading.

Summary: When a breakup via cupcake threatens to crumble their friend’s life for good, Mel and Angie race to solve the murder as this New York Times bestselling series continues…

Love is in the air at Fairy Tale Cupcakes as Angie prepares for her wedding, but co-owner, Mel, is preparing for a breakup. Her old friend, Diane Earnest, is dumping her fiancé after discovering he’s only marrying her for her money. She wants Mel to personally deliver a batch of caramel breakup cupcakes to the louse and give her a play-by-play of his reaction.

When Mel finally tracks the man down, the look on his face isn’t the reaction she was expecting: he’s dead. After the police arrive and see the incriminating cupcakes, Diane becomes their prime suspect. If she hopes to taste freedom again, Mel and Angie must make sure the real killer gets their just desserts… END_OF_DOCUMENT_TOKEN_TO_BE_REPLACED

Summary: The Winter Market in the French Quarter is in full swing, but murder isn’t taking a holiday in the latest from the New York Times bestselling author of Parchment and Old Lace…

The holidays are a busy time for scrapbook shop owner Carmela Bertrand—but not so hectic that she doesn’t have time to enjoy browsing the booths at the Winter Market with her best friend Ava. The last thing the ladies expect to see is a thrashing man stabbed by a serving fork, dying in front of them.

The victim is loathed restaurant critic Martin Lash, who posted his scathing reviews on the Glutton for Punishment website. And the prime suspect is New Orleans restauranteur Quigg Brevard—who was seen giving the critic a tongue-lashing minutes before someone stuck a fork in him. An old flame of Carmela, Quigg asks for her help, which does not please her current beau, Detective Edgar Babcock, to say the least.

Before her relationship is the next victim, Carmela needs to find a murderer who had no reservations about punishing the culinary curmudgeon… END_OF_DOCUMENT_TOKEN_TO_BE_REPLACED

Carmela is having a lovely night with the man that puts the va-va-voom in her heartbeat- Detective Edgar Babcock. A nice dinner, a walk home with moonlight and romance in the air- well, life doesn’t get much sweeter for Carmela.

Screams are heard from the cemetery as Edgar and Carmela walk by. Edgar races off to find out what is happening and Carmela is close behind. The cemetery on a normal day is spooky enough- but at night, it’s off the charts spooky. Especially when Carmela discovers who was screaming…. END_OF_DOCUMENT_TOKEN_TO_BE_REPLACED

Check in for some Southern hospitality in Plantation Shudders, the Cajun Country series debut from Ellen Byron.

It’s the end of the summer and Prodigal Daughter Maggie Crozat has returned home to her family’s plantation-turned-bed-and-breakfast in Louisiana. The Crozats have an inn full of guests for the local food festival–elderly honeymooners, the Cajun Cuties, a mysterious stranger from Texas, a couple of hipster lovebirds, and a trio of Georgia frat boys. But when the elderly couple keels over dead within minutes of each other–one from very unnatural causes– Maggie and the others suddenly become suspects in a murder.

With the help of Bo Durand, the town’s handsome new detective, Maggie must investigate to clear her name while holding the family business together at the same time. And the deeper she digs, the more she wonders: are all of the guests really there for a vacation or do they have ulterior motives? Decades-old secrets and stunning revelations abound in Ellen Byron’s charming cozy debut, Plantation Shudders.

Cozy mysteries are a book type that are close to my heart. I find them to be filled with great characters that I look forward to seeing again and again.  END_OF_DOCUMENT_TOKEN_TO_BE_REPLACED

Our adorable Key West food critic, Hayley Snow, is back with another round of amazing sounding recipes, tidbits about the life in Key West and…. murder!

Valentine’s Day is fast approaching the town of Key West- but Hayley is too worried about her job to take (much) notice. With a shake-up at Key Zest, Hayley now reports to her new boss, Palamina, while still dating her other boss Wally. Well, if you can call it dating- because between the work that Hayley does for Key Zest and Wally’s mom being sick- the romance aspect is taking a major snooze. Is this just a temporary bump in the road to Loversville or is it a sign? END_OF_DOCUMENT_TOKEN_TO_BE_REPLACED

Avery Aames is doing a tour with Great Escapes for the release of her latest Cheese Shop Mystery, AS GOUDA AS DEAD.

As Avery tempts us with the pics of the good looking food- she was also kind enough to provide a recipe. (So Avery, I’m not too mad about you making me want to lick my computer screen 🙂 END_OF_DOCUMENT_TOKEN_TO_BE_REPLACED

So, lovely folks- the super-smart Tanya at 52 Books of Bust has declared the time between November 1-December 15th to be FREE RANGE READING. Eek! Can’t you just feel the excitement in the air?! END_OF_DOCUMENT_TOKEN_TO_BE_REPLACED

Ya’ll… You know how I adore my cozy mysteries. They are some of my favorite reading. As I’ve been putting together this Spook-Tacular Month of posts, I began thinking about my cozy mysteries- and trying to remember some good Halloween ones. I found a few- just in case you like your mystery to be on the light side (and perhaps want to cook up some sweet treats for Halloween!) END_OF_DOCUMENT_TOKEN_TO_BE_REPLACED 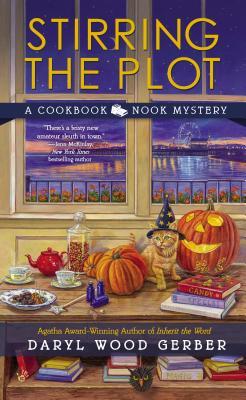 It’s Halloween time in Crystal Cove- and Jenna has The Cookbook Nook all ready for the most spook-tacular season! With Crystal Cove having many stores setting up Halloween displays and events- everyone is excited for the Halloween season. No one is more excited than the Winsome Witches, though, who host a major fundraiser each season. The Winsome Witches are a group of local women- and they always have a great time.  Until……………. END_OF_DOCUMENT_TOKEN_TO_BE_REPLACED

The author sent Traveling With T this book for review consideration.

Murder of a Needled Knitter

Finally, finally, finally Wally and Skye are married. After dating for what feels like forever- the wedding bells have rung and it’s now time for the honeymoon! Skye cannot wait- the cruise sounds amazing. Skye is picturing moonlit walks, having fun in the sun with Wally and all the other wonderful things that a cruise offers……. and then she sees something that may just make her honeymoon not quite the dream time she longed for. What (or shall I say who) could put a damper on a newlywed’s honeymoon? END_OF_DOCUMENT_TOKEN_TO_BE_REPLACED