I adore Giveaways! Ya’ll know that! What I adore almost as much as winning giveaways is letting you, my faithful readers of Traveling With T,  know about the amazing giveaways that other sites are having. I know that while I scour the websites, looking high, low and everywhere in between- that there are probably still hundreds upon hundreds I miss mentioning. But I’m trying!

Love at First Book is giving away 6 books! 3 winners will pick 2 each- and she has 9 to choose from: He’s Gone, The Last Camellia, The Explanation for Everything, The Girl You Left Behind, American Dervish, Girlchild and Shorecliff.

Books Speak Volumes is giving away 1 book- but letting you choose among her 3 favorites for 2013:  Burial Rites, A Constellation of Vital Phenomena,  Life After Life (the Kate Atkinson version!)

Books Speak Volumes is also giving We Are Water by Wally Lamb!

Book-Alicious Mama is giving away Is This Tomorrow, Killer Image, Code Name Verity, Man in the Blue Moon, The Unknowns and The Husband’s Secret.

The Relentless Reader is giving away The Husband’s Secret as well.

Chick List Is Not Dead is giving away The Theory of Opposites by Allison Winn Scotch.

Traveling With T is giving away The Perfect Match by Kristan Higgins (last day to enter!)

Traveling With T is also giving away Wyoming Bold by Diana Palmer.

Books in the Burbs is giving away The Preservationist by Justin Kramon- giveaway ends Nov 30th!

Love At First Book and The Book Wheel are still talking about Orange is the New Black! Join in the fun! 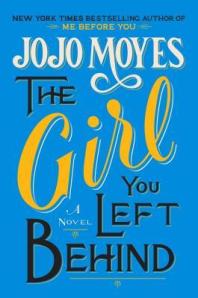 Sophia lives in a small France town with her sister, brother and their children. It’s World War 1 and the community has lost it’s spirit, it’s sense of fun, it’s joy. Most of their husbands are gone to fight in WWI, the Germans have taken over the town, and life has altered dramatically. Still, the women soldier on. They try to keep life as normal as possible- and some make desperate choices- not for themselves; but for the greater good.

Sophia is one of these women. The Germans have decided they need a new place to stay and eat and her hotel is the desired location. Much as Sophia does not want them in the building (similar to how Scarlet felt about Yankees at Tara) she recognizes that cooking for them might provide her family with a few extra morsels- and the hope to get through a dark period. One of the Germans, the new Kommandant, takes a liking to a beautiful painting. A painting that Sophia’s husband did of her- back in a time where life was good, food was plentiful and hard times were not known. Sophia is repelled and yet drawn to this man, this man who can talk art, who can almost remind her of life before the war. For her family, she is nice to the Kommandant- and they, at times, learn to see each other beyond the role of enemies. One day, Sophia learns news about her husband- news that hurts her deeply. She knows that she must try to have her husband brought back home- and sets out to use the 1 thing she has that the Kommandant wants…. the painting. Only, her plan does not go exactly as she hoped- and Sophia, like other women making hard choices, finds her life is about to get infinitely worse.

Nearly a hundred years later, Liv, lives in London. Liv is young and bright- and she has incredible sorrow in her life. Her husband has passed away and the only thing that brings her joy is a painting that he gave her. The painting is of a woman, of a woman from a long ago time. It’s striking and means a great deal to Liv.

The painting also means a great deal to other people- as the painting is the painting that Sophia had. As Liv fights to cling to a memory of her husband, one of the things that he gave her that brings her joy- she has to consider other things. Should the painting be returned to it’s original owners? Is the painting rightfully hers since her husband bought it?

The painting is so much more than a painting. It’s love, trust, putting others needs ahead of your own- the painting is a reminder of good times, of a life before everything changed. The painting has value- but the true value is not tangible.

Jojo Moyes takes a real life event (WWI) and creates a fictional story that is heartbreaking. Utterly heartbreaking. Then because she’s not quite finished breaking the reader’s hearts- she adds a current story with a woman who has lost her husband and may lose the 1 thing that is the last thing he gave her. While Sophia’s story is ten times more compelling than Liv’s- Sophia’s was almost too hard, for me as a reader, to enjoy. This is the fault of Jojo- as she takes situations, gives them a twist, and makes the reader feel like they are right there suffering along with the character.

The Girl You Left Behind is a book for book clubs- the club members can debate the actions of Sophia and Liv, as well as what they think they would do if in same situation. However, be prepared- because while as a reader you might have a strong reaction to what the right thing to do with The Girl You Left Behind is, by the end of the book- you may be questioning everything.

Can you believe that next week is Labor Day Weekend? Where, oh where did my summer go?!

PS: Plus a mention of an interview I did with Katherine Center, author of The Lost Husband, that just happened to make Deep South Mag’s Summer Reading List 2013!

Linus’s Blanket is giving away a copy of The Girl You Left Behind by JoJo Moyes! (this giveaway ends TODAY!)

Always With A Book is giving away Three Little Words by Susan Mallery!

Traveling With T is giving away The Outcast by Jolina Petersheim!

Traveling With T is giving away The Lost Husband by Katherine Center!

**Just added: The Book Wheel is giving away Etched in Sand by Regina Calcaterra.  This giveaway ends in 2 days!

3. Another Blogger Made Of AWESOME was featured this week on Traveling With T!  Katherine @ Story Matters has quite a story and a nostalgic #literaryconfession!

4. #ctbs is still going on- so far, I’ve read 4 books from my shelf (a far less admirable goal than I’d hoped- but this last week of August might turn things around!)

5. My #fridayreads Beautiful Day by Elin Hilderbrand- what are you reading for #fridayreads?

7. I reviewed Whistling Past The Graveyard by Susan Crandall this week on Traveling With T!