It’s a day in the life of Jane Ryland. Siting outside of a family home, looking for details for a story on foreclosed homes. What should just be a run of the mill ordinary day- a day where Jane gets a few photos, some video, and another sad story to add to her overall piece of foreclosed homes suddenly gets a lot more interesting. What made it more interesting? END_OF_DOCUMENT_TOKEN_TO_BE_REPLACED 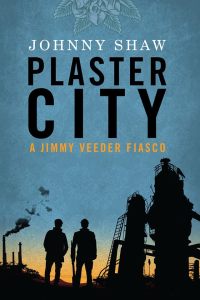 Today, Traveling With T is a stop on the Plaster City by Johnny Shaw blog tour! My stop on the tour consists of the humorous interview that Johnny Shaw conducts with his main character, Jimmy Veeder. After you read the interview, be sure and enter the giveaway via the Rafflecopter link ( Kindle Fire HD and e-copy of PLASTER CITY!)

END_OF_DOCUMENT_TOKEN_TO_BE_REPLACED 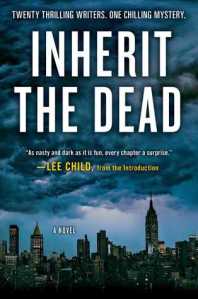 Inherit the Dead is a collaborative effort amongst 20 great and fantastic mystery writers in their own right. They teamed up to write this book to help benefit the group Safe Horizon– a victim assistance agency that provides a multitude of options and support for victims of various crimes.

With each author writing a chapter, one might wonder if the book flows nicely- and I’m here to say, it does. The mystery is good, the plot interesting. Some chapters are a bit better than others- but that’s just my opinion. Overall, a good book to read for mystery/crime buffs.

Meet Perry Christo- a PI that has a checkered past. Once a police officer, until he was forced to retire- Perry is a broken man. Perry’s job was part of his identity- and being accused of being a dirty cop is something that haunts him daily.  He laments about the loss of his marriage and daughter, the loss of his former job as a police officer- and often wonders how things could have been different.

Perry has been hired to find a girl. A daughter of a wealthy woman, Julia Drusilla, is looking for her daughter, Angelina. Angelina or Angel as she likes to be called- is almost 21, a fun and spirited woman- and has a difficult relationship with her mother. Her mom wants her found because on her 21st birthday, Angel will inherit a great deal of money- but only if she signs on her 21st birthday. Perry is a bit skeptical about Julia- but he decides to help her find Angel.

The search for Angel is not going to be easy, though. Her father hasn’t seen her and is not worried, her best friend doesn’t want to help Perry and Angel’s lover is 10 kinds of shady.  When Perry finds out information about the last night anyone saw Angel, his feelings of dread rise- as Perry thinks that someone might have been stalking Angel. The question is- who? And why? Because she was about to inherit a great sum of money? An inheritance that no one is supposed to know about? Or did Angel make an enemy that had nothing to do with her inheritance?

Perry is not sure who to trust. Or where to look. He only knows that finding Angel is his top priority- he feels that this girl needs him. Even though she’s had a life of privilege, she’s in trouble. Can Perry find Angel? Will Angel inherit the money? Or has Angel’s fate been determined before Perry was hired?

A twist and turn of a tale- mystery and suspense- some family drama, some police procedure- all creates a story that is sure to entertain.

Entertaining. Enjoyable. At first, I was unsure how 1 book written by 20 authors was going to work- would the story flow? Would it be enjoyable?  Yes and Yes. While some chapters, in my opinion, are better than others- overall, the book is a nice piece of work. The plot and the characters are thought-out, the ending is fast  and intense- and there are enough clues and red-herrings dropped through-out the book to entice a reader and keep them guessing.

*This book was sent to me by Touchstone Publishing in exchange for a fair and honest review. All thoughts and opinions are mine alone.

Alafair Burke, author of Never Tell, has 2 series featuring women leads- one is Ellie Hatcher and the other is Samantha Kincaid.  Alafair Burke writes her characters and stories based on her experience as a former prosecutor. Alafair’s interest in crime stories could be directly related to the fact that when she was a child- she lived in the area that the criminal known as BTK used as his stalking ground. To find out more about Alafair Burke- her reading interests, future books and more- please visit her website, like her on Facebook or follow her on Twitter. 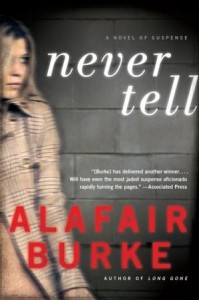 Ellie Hatcher is called on the scene of a posh New York townhome and finds a young teenage girl, in a bathtub with wrists slit and a suicide note- it’s hard to not state the obvious fact- that this girl, Julia Whitmire, no matter how much she appeared to have- must have been deeply unhappy and wanted to end her life. Ellie feels “if it walks like a duck and quacks like a duck- then it’s a duck”. However, Julia’s parents do not believe their daughter would kill herself and they call in favors and connections to make sure the NYPD is doing their job. As Ellie and her partner go back to scene- a discovery is made that makes the NYPD detectives want to question this case a bit further.

As Ellie attempts to get to the bottom of this case- was it a homicide or suicide- she crosses paths and rubs elbows with all different kinds of people- the prep school that Julia attended that has quite a distinguished alumni group, the homeless kids that Julia and a friend of hers liked to hang out with, and many others.  Ellie is still fairly convinced that it’s a suicide until the computer tech at NYPD turns up some interesting findings that show Julia may have been engaging in cyber-bullying.

With each day that passes Ellie wonders if her and her partner will unravel the strings that are tying this case. With a little luck and a lot of persistence- they find the clues that are needed to solve this case. But by the time the case is over, Ellie is left to ponder that sometimes there are no answers to the questions- and asking the questions can sometimes do more harm than good.

A story that starts off with the question of a suicide or a homicide would have the reader thinking that this was the major crime of the story. Not in Never Tell, though. While Julia Whitemire’s death is what sets this story in motion- it’s the way the death happens and the deep, dark secrets behind it that make this a compulsively readable book. Each time, I thought I had this storyline figured out, Alafair Burke added another twist. Enjoyable, suspenseful, and Ellie Hatcher is a great character. I look forward to reading other Ellie Hatcher books- just to see how her mind works!