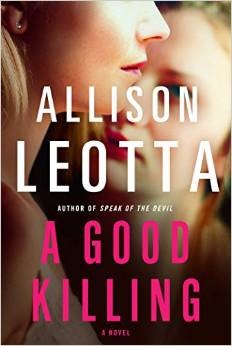 Anna Curtis is back in her hometown. With just a short time before what should have been her wedding day, Anna is back home to Michigan- a place she has not visited for years. Why is she back? Her baby sister needs her.

Jody has been accused of killing the local hero, the all around nice guy, the man of the town- Coach Owen Fowler. Anna is stunned- why would her sister be accused of this? How is she going to find the truth- since Jody is being evasive and the town is ready to run both Curtis women out on the first thing leaving! Anna has to use all her skills and knowledge about the law as she takes on her sister’s case- leaving her prosecutor chair behind and slipping into the defense chair. Because she knows her sister did not kill Coach Owen Fowler. Or does she?

With help from a former friend, Cooper Bolden, Anna sets out to find the truth about Jody, about who killed Owen and to stand her ground against the town.

Two years ago, I read SPEAK OF THE DEVIL by Allison Leotta and really enjoyed her writing style. Allison writes much like a Law and Order episode- telling both sides of the story- there is police procedural feel with much insight into the world of prosecution- and to boot, a good mystery!

I was really excited to hear about A GOOD KILLING and shortly after getting the book, I began to read. I LOVED this book. Seriously. Why did I love it so much? Let’s discuss:

Anna in her role as a sister- listen you could tell that sometimes Anna wanted to pinch Jody. She knew there was something going on. She could feel it in her bones- and yet, she knew that, as a defense lawyer, it was better for her not to know everything. Anna and Jody brought out the best (and sometimes worst) in each other- and that made for good page flipping.

Anna beginning to understand that just because she did not marry her ex-boyfriend, life is not over. She’d been dealt a bad blow- it was a complicated situation (and that’s putting it mildly) BUT Anna began to see that there was more to life than Washington, DC- in fact, Michigan- for many reasons- was beginning to look pretty good!

The mystery- I was back and forth over the question “Did Jody do this?” The backstory, the semi-complicated; but once you began to piece it all together genius of a mystery- well, I devoured my book.

Let me break it down for you- if you’ve read Allison Leotta’s previous work- you know her style, her ways, and you should be entertained. If this is your first Allison book- you might be a tad confused by some of Anna’s backstory- but the main point of this book- the mystery- will keep you entertained. Recommended.

*This book was sent to Traveling With T by Touchstone Books for review consideration. All thoughts and opinions are mine alone. A GOOD KILLING was also a Traveling With T May Futuristic Friday selection.*