Friday, Bloggiesta, and lots of reading! What’s your Friday plans?

1. Deep South Magazine and their #literaryfriday: News of James Franco as Faulkner, SoFest of Books in Nashville, 11 scariest mothers in books, upcoming book signings, what Erin is reading now (some good looking books that *may* be on the upcoming Fall Reading list!) and much more!

2. Bloggiesta is happening this weekend! Basically, it’s a 3 day weekend to work on your blog, make connections and visit the other blogs hosting the mini-challenges. It’s blog love, baby! I don’t always participate in Bloggiesta- but I try to do some work when I can during these 3 day blog-love weekends! This time, I’m REALLY trying because 2 of my fav blog buddies- Rebecca @ Love At First Book and Allison @ The Book Wheel are both hosting mini-challenges (Whoo, Rebecca and Allison! Proud of you girls!)

Love At First Book: How To Host (and participate) in a Digital Book Club & Giveaway!

Always With a Book: Bloggiesta.. My To Do List and Updates

3. Did you know that I’ll be co-hosting the Hank Phillippi Ryan chat with Literary New England on September 25th at 8pmEST? You didn’t?! Well, I am! Be there as we talk about THE WRONG GIRL and giveaway some books! Use hashtag #LNEChat to join I the fun! This will be the first of 2 scheduled Literary New England/She Reads chats- and everyone is very excited!

4. This isn’t Bloggiesta related, but Ivory Owl Reviews blogged this week about what she learned in her first year of blogging- and it’s worth a read!

5. #giveaway: Have you heard of The Returned by Jason Mott? The blog-osphere is all a-twitter about this book! And you are in luck! Luxury Reading is giving away a copy! Need more of The Returned? The Book Wheel was lucky enough to get an interview with Jason Mott (that girl is a mover and shaker- folks!)

6. 2 reviews posted this week on Traveling With T: Beautiful Day by Elin Hilderbrand and What A Mother Knows by Leslie Lehr.

7. Holly Goddard Jones, author of The Next Time You See Me, stopped by Traveling With T this week for an Interview and Author Spotlight.

8. Book Lovers Unite September read Astor Place Vintage is still going on at Book-alicious Mama and October’s book has been announced for when it returns to Traveling With T: The Life List by Lori Nelson Spielman I’m very excited for this discussion- and I hope you will join in the fun! Reading schedule to be posted next week!

9. Catching up on posting about 2 fab authors I met over the summer: Meeting Anton DiSclafani and Meeting Susan Crandall

11. My #fridayreads: Astor Place Vintage, Wedding Belles by Beth Albright, and maybe 212 by Alafair Burke! What are you reading for #fridayreads?

Happy Reading and good luck with Bloggiesta if you are participating! 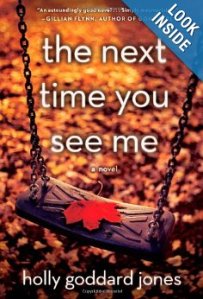 I had the opportunity to review Holly Goddard Jones debut novel, The Next Time You See Me, and I really enjoyed the book! So much so that I decided to ask Holly if she would come by Traveling With T for an interview- and lucky for me, she said yes!

Holly, how did the idea of The Next Time You See Me happen?

I read a story about a little boy going into the woods and getting scared by a hermit, and it got me to thinking about a little scraggly, undeveloped area near the subdivision where I grew up. As a girl, I went into that wooded area sometimes to explore, play pretend, gather bugs and leaves for school science projects. My parents didn’t like me going—partly because it was private property, partly because they didn’t like me venturing so far out of sight of adults—and of course that was part of the attraction and the thrill. When I was a girl, about eight, a woman’s dead body was found about half a mile from my home, and so I always wondered what would happen if I’d have been the one to find the body. So the book took off from that premise: a girl finds a body. In this case, she makes an unusual choice about what she finds.

Are any of the characters based on you, Holly?

All of the characters I write have some of me in them. The story above might make you think that the little girl, Emily, is based on me, and she has a few things in common with my 13-year-old self. Or you might see me in Susanna, an English teacher in her late 20s. But I identify as much with the characters in the book who aren’t obviously like me: Wyatt, Tony, Sarah. In fact, if there are tender truths about me in my fiction, I tend to place them with unexpected characters, as a way of forging a connection with them.

How long did it take to write The Next Time You See Me?

Gillian Flynn wrote a blurb for The Next Time You See Me. How was having an author like her, months after her Gone Girl success, writing a blurb for your book?

I was so grateful to her. I loved Gone Girl, and so it was an honor.

Do you think The Next Time You See Me would make a good movie? Have you ever wondered who could make up the dream cast?

I think it would make a better television show than a movie—something in the vein of Twin Peaks or The Killing. As for casting the characters, I find that really hard. I have a vision of each of them in my head, and they’re not really people who’d fit some typical Hollywood standard for beauty. Anna Kendrick could maybe play Susanna, just because she’s close to the right age and to me she’s pretty but very real looking. I had to think hard to come up with that one. It seems to me that there’s someone obvious out there who’d be great as Wyatt, but I’m drawing a blank. Wyatt’s supposed to be 55 in the novel, but I think he’d have to be played by someone older, since your average overweight Kentucky factory worker is going to wear 55 a lot differently from, say, Kevin Bacon, who is 55 according to IMDB. Maybe Phillip Seymour Hoffman in 10 years.

Do you have a writing space? A writing routine?

I just moved my office to a downstairs bedroom, so that’s where I’m writing now. I don’t have much of a routine. I wish I did.

Holly, are there any upcoming events that fans can attend to meet and greet with you?

I’ll be doing some festivals this fall: The Eudora Welty Writers’ Symposium, the Kentucky Book Fair, and the Southern Festival of Books. All that info will be up on my website at some point.

The ending- did the ending of The Next Time You See Me reveal itself as you were writing? Or, Holly, did you know how the book should end from the moment you began writing?

I had a vague sense of what the tone of the ending would be, but I didn’t know the specifics until about two thirds of the way in. Then I had the idea for the Thanksgiving epilogue. I skipped ahead to write that—I hardly ever write out of order—then went back and wrote to the end. If you write a character-driven novel, I do think that the book you write has to teach you what it’s ending will be.

What are you working on next, Holly? Are you still gathering ideas or do you have a book in mind?

I’m working on a new novel and am perhaps a quarter or a third of the way into the rough draft.

*Thank you Holly Goddard Jones for agreeing to be interviewed!

Holly Goddard Jones debut novel, The Next Time You See Me, was published February 2013 by Touchstone Publishing. To connect with Holly, please visit her website or Facebook page!