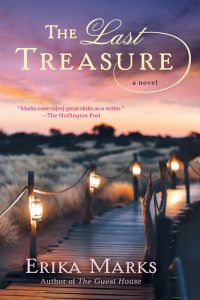 Summary: From the author of It Comes in Waves and The Guest House comes a novel of three lives entangled in the secrets of the sea and the enduring bonds of love.

As students with a shared passion for shipwrecks, Liv, Sam, and Whit formed a close bond searching for the mysterious Patriot, a schooner that disappeared off the Carolina Coast in 1812 with Aaron Burr’s daughter Theodosia aboard. But as the elusive ship drew them together, love would bring them even closer—and ultimately tear them apart.

It’s been seven years since Liv left Sam to be with Whit, and the once close-knit trio went their separate ways. Liv has given up her obsession with Theodosia Burr to focus on her career as a salvage diver and her passionate but troubled marriage to the reckless and hedonistic Whit. But when a diary of Theodosia’s is discovered in a collector’s estate, she is pulled back to the world of the Patriot, this time with startling new clues to what might have really happened.

Diving back into the lost history of the Patriot could be just what Liv needs to find closure to a mystery that still haunts her. But when she and Whit reunite with Sam for one last salvage in North Carolina’s Outer Banks, buried romantic tensions begin to resurface, and once again Liv must choose between two men with very different hearts.

Listen… T doesn’t play when I say this: Erika Marks is one of my fav authors. I have adored her since Little Gale Gumbo and if you haven’t read that gem- well you might as well just pass me some Kleenex as I wail “WHY?????????” Because it’s that good. #nolies

I was talking to Erin at Deep South Magazine about Erika’s books the other week (she’s the one to blame for my Erika-loving since I won LGG from her!) and I was rambling on about how Erika is becoming more of a layered writer- her characters were always good, but now.. they are exceptional. Not black and white- full of color and many layers. It’s this thought that I will return to as I ramble on about the men in this book later in this review.

The story of Liv mirrors some of Theodosia’s, so it’s not wonder that Liv wanted to find out what happened to her. I loved how she had plans, maps and ideas. Very cool.

Ok so I need to do some slight spoilers to get to this part that I really want to talk about- the men!

When I saw this book, I thought that Sam and Liv would be on their way to happy ever after and that Whit would have stolen her and tempted her with a new kind of life. I felt that this would be a redemption story for Sam and Liv- a way to right past wrongs, etc.

I was SO wrong. I won’t spoil what does happen, but I was wrong.

Erin questioned me if I was Team Sam or Team Whit and for awhile I was full on Team Sam (T-shirts were being made, I was so Team Sam). However, the further I got into the book- the more I realized that I shouldn’t be waving my Team Sam flag so high.

But I could never fully get behind Whit. Whit was fun. Impulsive. You would never know if he had gambled away your life savings or not with him, but the ride to wherever would be entertaining.

Parts of Sam and parts of Whit would make the perfect man. But each character had flaws.

AND I FREAKING LOVED IT.

Sam provided stability. Whit a fun future. Both men had flaws and faults and were real. So real.

This is where I love seeing growth with Erika’s writing- her ability to write these characters and make you love them, see the good/bad and just hope that Liv makes the right choice.

Bottom line: As I said in my Goodreads review: “Erika Marks combines love, the thrill of treasure hunting and the mystery of what happened to Theodosia Burr.” Translation: Carpe diem and buy this book.

2 thoughts on “#FuturisticFriday Review: The Last Treasure by Erika Marks”