It’s the book that everyone is talking about. Book bloggers are already talking about how THIS book will be on their end of year best lists (and it’s only February!) It’s a book that has built a buzz with many curious when this author would enter the world of Twitter (He has now!)

What is this book?

This book is……… (drumroll, please)

My Sunshine Away by M.O. Walsh!! 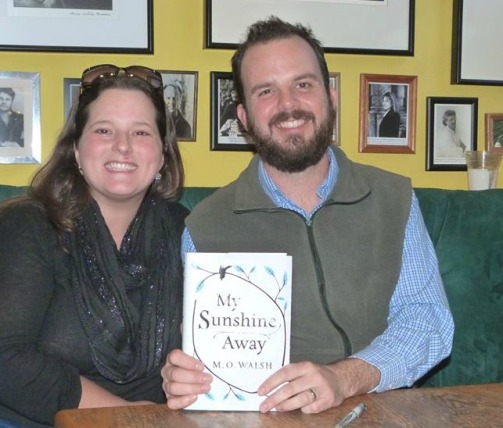 I was able to meet the author recently at one of my local indies. Having received the book from a contact at Putnam and eagerly telling my bookish pal, Erin from Deep South Magazine, about this book- the ties to Louisiana and all that jazz- and she was equally excited about the premise of the book. But that compared nothing to how we both felt about the actual reading. Let me just say- if you haven’t read it- what are you waiting for?

But back to the signing/reading!

M.O. Walsh begins reading. He starts Chapter 1 and the crowd of 25+ sits in silence listening as M.O. begins the tale of what happened to Lindy.

After he finished Chapter 1, he calls My Sunshine Away a love story. The crowd chuckles as we’ve just heard the first chapter. But, M.O. begins to explain that at the roots of this story, there is a love story. The love of the narrator for Lindy.

Then THE question was asked- the question of “did you consider not letting the perpetrator be known?” M.O. grins, says that’s a great question- and then starts talking about that within the first 60-70 pages of writing he’s written, he’s realized that he has promised the writer a mystery, so he will have to reveal the perpetrator. But, he confesses that he doesn’t really have a mystery background and he didn’t start My Sunshine Away to be considered a mystery.

The talk turns to the narrator and how we don’t know his name- and it was questioned as to why this was. As the author explains, the book is more like a confessional and the character would not use his name in a confessional.

When asked about many of the chapters ending with a cliff-hanger style, he talks about he really thought of it more as a reveal- sometimes it was high reveal, sometimes it was low reveal. It was less of a plan, though.

And lastly M.O. Walsh told us a story about his English teacher reading Edgar Allan Poe and that was when he became interested in writing.

Again, bottom line- if you haven’t read this book- do so!

Need more convincing of how fab this book is? Here’s my  review of My Sunshine Away!

8 thoughts on “Meeting M.O. Walsh author of My Sunshine Away”