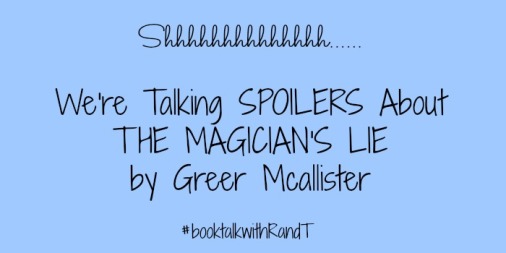 Well folks, it’s been a blast this week discussing THE MAGICIAN’S LIE. Special thanks to Rhiannon @ Ivory Owl Reviews for her gracious hand in the organization of this week!

(It was totally the giveaway, right? I can tell by the way your eyes light up at the mention of the word giveaway!)

Well whatever the reason- I sincerely hope you’ve enjoyed this week! We’re not quite finished, though. We’ll be talking spoilers at our respective blogs and there will be some tweeting back and forth about potential movie cast. Got an idea? Tweet @ivoryowlreviews or @rockstar1023 and use the hashtag #booktalkwithRandT and let us know who the perfect Amazing Arden is.

Let’s get spoiler-licious: (If you don’t want to be spoiled, stop here. Seriously.)

1. So Ada’s mom. My gosh, how I wanted to wring her neck. I mean like really- if me and her were in the same room, it would be all “going to the woodshed and only one of us coming back” kind of thing. So she gets knocked up with Ada and lives at her parents (that is not a problem, to me) Her parents may not have been the happiest with that happening- but, here she was- about to get a chance at a life, a life that was going to be interesting- and she throws it all away for love. For LOVE, for pete’s sake. (Yes, I get the fact that I’m sounding all cranky and bitter- but really- she had a daughter to think of. She needed to think of ADA.) ***Side note: I’m not through raking her over the coals.***

2. Dear and darling Ada- when you went to the shed to practice, I was all like the gal watching the scary movie and screaming “Don’t go in there! Don’t go!” Surely, there could have been a better place to practice. Maybe even one near people who could have seen/heard the problems?

3. Back to Ada’s mom- I get that you were in love. That you followed the man to some small town where he had the brilliant idea to teach people about music. I get that once you got there- things didn’t go as planned. I get that at this point… because you had thumbed your nose at your parents that you now had to depend on the kindness of strangers. What I don’t get is where was your maternal protective instincts? Your child is trying to tell you that Creepy McCreeperson Ray was deranged- and yet…. you let love blind you again. I get that you had made your bed and you had to stay in it- no matter how distasteful it could be at times- but you should have put the mama bear instincts on and protected Ada.

(I think I’m done raking Ada’s mom over the coals!)

4. I’m not going to talk about the husband being killed- I will just say that Greer kept me on the edge of the seat as she revealed those tidbits.

5. I still wonder who Ada’s dad is- might we find out in a sequel (or a pre-quell), Greer?

Book Talk With R and T