I am a total scaredy cat. I always have been; which means that RL Stine’s “Goosebumps” series were not my cup of tea as a kid, or as an adult!

However, one day if I get really brave these are the 5 “Goosebumps” books I would read! 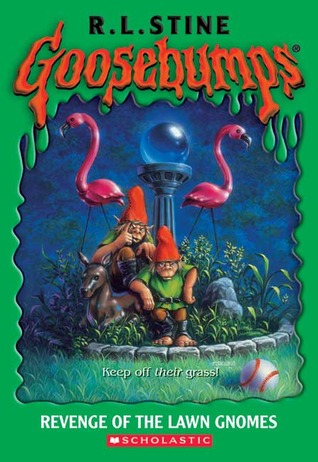 It Came From Beneath The Sink

Phantom Of The Auditorium 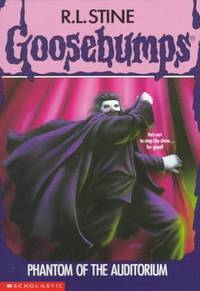 I like a lot of musicals, one of them being Andrew Lloyd Weber’s “Phantom of the Opera”. (Which is actually pretty scary: murder, basements, cemeteries; and no croissants; a travesty considering the location). I figure if I can handle a Phantom in an opera I can handle one in an auditorium…I’d like to think!

Revenge of the Lawn Gnomes

I have so many questions. Why are the gnomes angry? What do they really have to be angry about? Are the flamingos bad too or do the gnomes just ride them into battle? Is there a battle? Is this wishing ball like an Eye of Sauron thing? Someone tell me!

I totally picked this book by the cover. I was hoping it would be a “hey we found this weird fur coat in Grandma’s attic and now I howl at the moon”. But looking closer at the cover, I think maybe it’s a possessed mascot costume? Which, if anything could beat a moth-eaten werewolf skin coat it would be a possessed sweaty, smelly mascot costume, amirite?

Legend of the Lost Legend

The name of this one just cracks me up. It could be about anything anywhere. But then you get a hint with a mean looking lady Viking. I’m a bit of a history nerd, so I’m a little curious as to how you could make the already pretty scary Vikings into something “Goosebumps” scary.

So those are my picks! Has anyone actually read any of these? Do you just want to tell me about them so I don’t actually have to read them and scare myself?

Have a Spook-tacular October,