Hello, darlings! When RockstarPR contacted Traveling With T a couple of weeks about THE VILLA, I was instantly drawn to the cover (to me, it looks like those watercolor pictures you see at vacation spots- so soothing. So pretty. So wonderful!) Intrigued by the cover, I took a quick look at my TBR pile and knew the odds of fitting this book in was like nil. Non-existent. Not going to happen. And yet… the cover kept calling to me. Well, because the folks at RockstarPR are well… rockstars- they had the option for a book spotlight- and I was all “Boom! Signed up!” 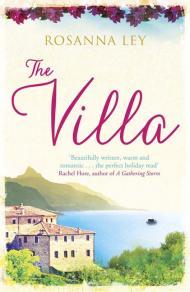 When Tess Angel receives a solicitor’s letter inviting her to claim her inheritance – the dilapidated but beautiful Villa Sirena, perched on a clifftop in Sicily – she is stunned. Her only link to the island is through her mother, Flavia, who left Sicily following World War II and cut all contact with her family. Could this be Tess’s chance to find out why?

Initially resistant to Tess going back to her roots, Flavia realises the secrets from her past are about to be revealed and decides to try to explain her actions. She compiles a book of her family’s traditional Sicilian recipes as a legacy to pass on to her daughter and tells her story which began in the summer of 1944 when she rescued an injured English pilot in the countryside near her home in Cetaria and helped nurse him back to health.

Meanwhile, Tess’s teenage daughter Ginny has lost her sense of direction. She is stressed by college and by her blossoming sexuality and consumed by questions that she longs to ask her father – if only she knew where he was.

Tess, a qualified diver, discovers the beauty of the underwater marine conservation area of Cetaria and falls in love with her inheritance. But there is a mystery attached to The Mermaid’s Villa concerning the missing Il Tesoro. What is this treasure and what does it have to do with her family? Tonino Amato and Giovanni Sciarra both seem to want to help her find out. She is drawn to Tonino, who creates dazzling mosaics from sea glass in the ancient baglio and tells her of the myths and legends of Sicily. But Giovanni warns her against him. Why are they sworn enemies and who can she trust? Tess must navigate a way through the prejudices of Sicilian history and the opposition of her family’s enemies in order to find out.

Why Traveling With T thinks THE VILLA will be a good read:

Hello, secrets?! Secrets are what helps make the pages turn, folks. No one wants a book to share all the secrets in the first pages- and this book looks like it has some ones that will be slowly revealed.

Why the cover of THE VILLA is divine:

As mentioned above, it’s like those watercolors you see in those cafes or vacation spots. Or in the movies at the café where the heroine decides to run off and find her a Italian lover. Most importantly- it just looks pretty!

Want to buy the book? THE VILLA can be found at Amazon and Barnes and Noble.

Enjoy, darlings- and do please let me know what you think of that divine book cover- doesn’t it look almost positively lickable?

2 thoughts on “Book Spotlight: THE VILLA by Rosanna Ley”