Today, today, TODAY…. It’s a Cover Reveal day! Yes, readers of Traveling With T- we are the first to see the cover of Paris, Rue des Martyrs by Adria J. Cimino!

How did we get so lucky?

The details: Adria contacted me a few weeks ago after hearing about my love of cover reveals (seriously- cover reveals are like the sweetest candy to me- nothing but love for a cover reveal!) I’ve taken part in them in a group effort- but this was a first to be asked to be the blogger who gets to reveal the cover. I wasted no time in telling Adria I was in- and we started the process of emailing and working out logistics.

So… many emails later and chit-chatting with each other- I’m pleased as punch to be able to unveil the cover….. Drum roll, please….. 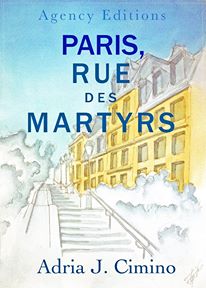 Looky-looky….. Isn’t is pretty? What does this cover say to you?

But wait…. There is more!

Traveling With T has an excerpt (I know- shut up, right?) Seriously, a cover reveal and an excerpt in the same day- love it!

Andre flipped a few coins into the jar of the same beggar who sat outside of Café Martyrs every night. He kind of felt sorry for the poor bastards wandering up and down these grimy streets. This whole damn city can be so depressing, he thought to himself as he pushed open the door and limped into the café.

He lit up a cigarette and sat down at a round table in the back, where he usually could get away with having a smoke. He ordered a scotch on the rocks, took a deep breath and waited. Waited for the boy who likely would spit in his face for being such a son-of-a-bitch. Andre smiled ironically, sadly, as he thought of his own shitty weaknesses. His scotch arrived. He took a sip, feeling it burn a path to his stomach.

Ten minutes passed along with most of the scotch and two cigarettes. Then he arrived. Right on time.

A tall blond with his mother’s dazzling eyes. He was wearing jeans and a white t-shirt that showed off a thin, well-built physique much like Andre’s at the same age.

“Might as well get the ball rolling,” Andre said under his breath. He lifted his glass in the boy’s direction and received a smile back. A brilliant, unexpected smile. Why the hell would this kid he had abandoned look at him with anything other than disdain?

He approached with the same timidity Andre had seen in him so long ago.

“Andre Wren…” he said. “I’m the Hugo you’ve been sending checks to all of these years.”

His voice was smooth, like Andre’s own, but with a slightly uneven pitch. He shook his father’s hand firmly, and then sat down opposite him.

The anxiety that had been building up within Andre since his conversation with the concierge reached a head as he looked up at the boy who had June’s eyes, but his expression. He needed a cigarette. With shaky hands, he reached for his lighter.

“I won’t offer you one of these,” he said as he lit up. “You’re better off without them.” He shook his head at his own ridiculous parental words, which felt so inappropriate in his situation. But Hugo didn’t seem to notice.

The waiter returned to Andre’s table.

“What will you have? Do you speak French or should I order for you?”

“A Perrier please,” Hugo asked the waiter in French. Then he turned back to Hugo. “I learned from Mom. She said I would end up here one day.”

“Why would she say such a thing?” Andre asked, taking a long stress-relieving drag on his cigarette.

“Because…” He gazed at the table for a moment, the little boy expression returning. “She said that if I wanted to be an actor, I would be better off starting here, where the world isn’t as harsh.”

Andre snorted. “You want to be an actor? I wouldn’t recommend it to anyone anywhere.

They—the audience, the industry—chew you up, spit you out and start over with someone new.”

So that was the reason for Hugo’s appearance. He wanted help getting his career started. He probably wanted to use the “Wren” name. Being that his old dad was no longer in tip-top shape, this would be the time to take over. Another Wren would make it to the top, only to eventually fall in one way or another.

Andre didn’t want this blood-related stranger to join his world. He didn’t want to explain the existence of a son to all of those people who didn’t give a shit anyway. But most importantly, he didn’t want to draw this boy into the trap of self-admiration that had ruined Andre’s chance for personal happiness. Andre told himself this wasn’t out of parental concern, but simply a part of wanting to keep any naïve kid from falling on his or her ass. Andre’s well-being depended on the stage—not on affection from family. The stage was a drug.

“Mom told me the same,” Hugo was saying. “She didn’t want this for me, but it just happened. As soon as I took part in one play… I was pushed into the performing arts program. Then the special high school.”

“So you’ve been involved in theater for a while…” Andre’s heart pounded. Was that voice anything like his? “Sing a few bars for me,” he said suddenly.

“Anything you want,” Andre said nervously.

The waiter returned with Hugo’s Perrier, and the boy took a sip. Then with serious eyes he looked at Andre.

“I didn’t come to you to discuss career plans,” he said.

“Why else would you want to see me?”

“I wanted to let you know that I’m here in Paris now…” He took another sip of his drink.

Andre lit up a cigarette and gazed into the blue eyes. It was as if this boy was seeking some sort of normal relationship with him. He was half surprised, half frightened.

“You actually want to talk with me after the earfuls June has given you?”

“Mom never has said much of anything, as a matter of fact.”

Even worse. That meant the boy would want detailed explanations about why Andre Wren never wanted to accept his own son.

“Look, Hugo,” Andre said, for the first time addressing his son by the name June had chosen alone. “You can’t expect much from me. One thing I can do is set you up in a decent apartment while you’re here so you won’t have to struggle.”

“I don’t want your help,” Hugo said firmly. “I have a place already, an acting class and a job.”

“No, no, no,” Andre said, exasperated. “She hasn’t made a name for herself yet. I can sign you up with…”

“No—I didn’t come here for that. I came for answers. I want to know why you left us.”

“Well that is all I have to offer.”

Hugo’s face went pale, as if he had been slapped. He pushed his drink aside and got up.

“I thought seeing me would make a difference… I thought you would want us to get to know each other. I don’t understand you, Andre Wren.” His voice was hollow with disappointment.

Andre felt his heart sink, but he didn’t know how to change his attitude and life. And he didn’t have the desire to do so anyway. Even at his age, he was terrified at the thought of being a father, of taking responsibility for this younger version of himself.

Hugo dropped a few coins on the table. Andre pushed them away, but Hugo insisted.

Andre watched him go, his heart as empty as that of a broken old man.

So…. wasn’t that excerpt pretty cool? Don’t you want to know more about Hugo and Andre? What’s Andre’s backstory? What about Hugo?

Want to follow Paris, Rue des Martrys on it’s journey from the cover reveal to author spotlights and reviews? Visit here to see where Adria will be next!

Want to buy Paris, Rue des Martyrs? It will be available in February from Apple IBookstore, Amazon Kindle, Nook Press, and Kobo.

*Thanks Adria J. Cimino for contacting Traveling With T about the opportunity of a cover reveal- wishing you much success!