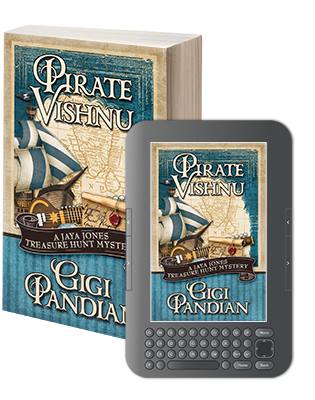 Today, Gigi Pandian stopped by Traveling With T to talk about her latest book, PIRATE VISHNU, Jaya (her character’s) #literaryconfessions and Indiana Jones. Read on for all the details in this fun interview with Gigi. And don’t forget- after the interview, there is the info you will need to get a signed bookplate (Shut UP! I know, right?!)

Hi Gigi- Thanks for agreeing to be interviewed at Traveling With T!

Thanks for having me!

Can you describe Pirate Vishnu (A Jaya Jones Treasure Hunt Mystery) in 15 words or less?

A treasure map of San Francisco’s Barbary Coast leads to mystery and romance in India.

Why will readers connect to Jaya Jones? What sets her apart from other characters?

Jaya is a classic adventurer in the tradition of Elizabeth Peters’ strong-willed heroines, but she puts her own multicultural twist on the genre. She was born in India to an Indian mother and an American father, and grew up to be a professor of Indian history in San Francisco. She brings her experiences with her to her adventures, which helps her solve mysteries of the past linked to present-day crimes.

“Maneuvers a complicated love life she didn’t count on”- ooh, Jaya’s dealing with a love triangle! Do you, as the writer, know which part of the love triangle complements Jaya better? Or are you still deciding?

When I wrote Artifact, the first book in the series, I thought I had everything figured out. But my characters surprised me! They’ve taken on lives of their own and I’m not yet sure how they’re going to work things out. I can’t wait to find out.

RT Book Reviews says “Forget about Indiana Jones. Jaya Jones is swinging into action.” How does that make you feel? Indiana Jones is a pretty big pop culture icon- so being compared must be kind of cool!

It’s definitely exciting to see reviews comparing Jaya to Indiana Jones! When I was a kid, I created a cartoon strip called “Minnesota Smith” — the adventures of a female Indiana Jones. It’s surreal to have come full circle.

Is Jaya Jones based on anyone you know, Gigi?

I traveled with my anthropologist parents a lot when I was a kid, so I invented all sorts of mysterious treasure hunts as I played in castle ruins. When I began writing a novel I wanted to capture that spirit, so Jaya was initially based on me – but she grew into her own unique personality more than I was expecting!

What is the 1 thing that Jaya would never be without?

Does Jaya have any  #literaryconfessions?

Jaya Jones has a pretty big literary confession: She tells people she doesn’t have time to read fiction, since she’s a second-year professor who doesn’t yet have tenure, but she secretly loves classic adventure novels. She doesn’t admit to herself that she loves the thrill of the treasure hunts she gets pulled into, but her favorite novels are Victorian escapist adventures like King Solomon’s Mines.

*Thanks Gigi for a great interview!

Gigi Pandian is the child of cultural anthropologists from New Mexico and the southern tip of India. After being dragged around the world during her childhood, she tried to escape her fate when she left a PhD program for art school. But adventurous academic characters wouldn’t stay out of her head. Thus was born the Jaya Jones Treasure Hunt Mystery Series. The first book in the series, Artifact, was awarded a Malice Domestic Grant and named a “Best of 2012″ debut novel by Suspense Magazine. The follow-up is Pirate Vishnu. Gigi loves writing locked-room mystery short stories. Her latest, “The Hindi Houdini,” is an Agatha Award nominee for Best Short Story. 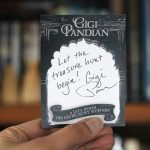 Where to buy PIRATE VISHNU:

Amazon, Barnes and Noble, IndieBound, A Great Good Place for Books, & Murder By The Book.