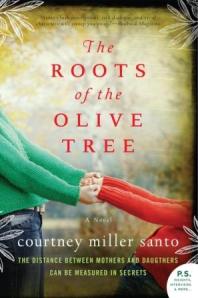 Courtney Miller Santo’s debut novel, The Roots of the Olive Tree, came to me through TLC Blog tours. I had not heard of the book before; but the description sounded like something I normally read. As I read, I found myself immersed in the life of these women- the secrets, the struggles, the questions, and much more.

After reading it, I knew I wanted to talk to Courtney more- and lucky for me (and my readers!) she agreed to an interview! Haven’t read The Roots of the Olive Tree? You’re in luck! There’s going to be a giveaway!

Courtney, I read on your website that your most prized possession is a picture of the 5 generations of women in your family. Did that influence the story of The Roots of Olive Tree?

The novel, in many ways, is an exploration of the family dynamics I grew up with. I had the fortune of having a long line of matriarchs in my family and I’d never found a book that explored the dynamics that arise when you get to talk with your great-grandmother about what your grandmother was like as a teenager. The matriarch of the book, Anna, is a fictional version of my own great-grandmother, who I lost this last October at age 104. My most prized possession now is a video of my nine-year-old daughter playing piano with her great-great grandmother.

How long did it take you to write The Roots of the Olive Tree?

Two pregnancies—that is to say the initial version took about nine months and then I spent nine months in revision.

Are any of the characters based on people you know? Or figments of your imagination?

When I wrote the book, I started with a clear picture of Anna (who is based on Winifred Rodgers, my own great-grandmother) and Erin, who is a version of me when I was in my twenties. The women in-between all contain characteristics of women in my life who I didn’t understand. In the case of Bets, I tried to work out questions I had of who my mother was as a woman (as opposed to my Mom) but in creating these characters, they very much became their own selves. At times, I find myself having imaginary conversations with Callie and Anna about Deb.

In the book, Anna, longs to be the oldest living person, but she’s also superstitious about the research Dr. Hashmi wants to do. I found that so interesting and such a telling story of the ages- because I think if I lived as long as Anna- I would not want to know the why; but being Callie’s age- I would be very interested. How did you decide on that particular angle?

Dr. Hashmi added an outside perspective to the Keller woman and helped raise the issues around aging and longevity that I was interested in. You are exactly right that Anna is much more interested in myth and accepts her longevity as an expectation, but Callie is much more troubled by it—in part because she has had a near death experience and because her body is damaged. In writing the book, I found that the natural questions and dilemmas about aging that arose as I wrote were all byproducts of the characters themselves. Once I started writing Callie’s section, I understood her view on aging and how different it was from her grandmother’s.

That tagline came pretty late in the production of the book and is a product of a conversation I had with my sister about our mother. We were up late talking about all that we don’t know about our mothers and what we as mothers conceal from their own children. It occurred to me the next day that distance can be measured in secrets and it felt especially applicable to Roots of the Olive Tree and the Keller women. I find that readers respond well to the idea that there is a natural distance between mothers and daughters—that grows out of having to be a parent—and the more time we spend with our mothers as adults, the fewer secrets they hold onto.

Do you have a favorite character in The Roots of the Olive Tree?

That is a Sophie’s Choice question! For me, I think that Bets is the heart of the book because hers is the only story that is complete by the end of the book—the other women’s journeys are ongoing and I expect them to show up again—especially based on the stories they keep telling me when I’m driving the car or in the shower.

Would you like The Roots of the Olive Tree to be made into a movie? If so, do you have a dream cast?

I discovered some of my favorite books because I saw the movie first—so of course I’d love for Hollywood to take an interest in Roots (especially considering how few parts there are for women over the age of forty). As far as a dream cast goes, I’d love to see the powerhouse combination of Vanessa Redgrave as Anna and Helen Mirren as Bets. For Callie, I always pictured Cybill Shepherd (who grew up in Memphis where I now live) because she can play sexy at sixty. Deb is the hardest for me to dream cast because she has to have that hard edge and yet also embrace redemption. Melissa Leo would be amazing. And for Erin, I’d love to see another Memphis actress, Ginnifer Goodwin play her.

Courtney- do you have a writing space? Or a writing routine?

I am a creature of routine! I try to write in the mornings for at least two hours—and preferably three. However my work space is always changing—especially since I just moved. Most of this book was written on my living room couch and the next one has been written in my office (which is literally a cement box with no windows. I can hear when it rains, but I can’t see it).

Are you working on another book? If so, can you give some hints at to what it will be about?

I am in the process of final revision on the next book. It deals with the troubles of three cousins (who just happen to be related to Bets). They come to Memphis to try and save a family house, which was built out of spite instead of necessity. There is this amazing tradition of building houses to make someone else angry or just to prove you could. One of them, in Virginia, was built in an alleyway because the owner didn’t like all the buggy traffic going through, another owner who had a view of the beach, had an addition built specifically to block his neighbor’s view. In the case of these cousins, the house was built on an odd plot of land that overlooks the Mississippi.

Courtney Miller Santo is hard at work on revision of her 2nd novel. To connect with Courtney, visit her website, Pinterest, Facebook, and Twitter pages. If you enjoyed, The Roots of the Olive Tree, let Courtney know (and consider posting a review to Goodreads, Amazon, or Barnes and Noble).

*Giveaway: One lucky winner will score a copy of The Roots of the Olive Tree. To enter, comment on this post and include your email (you may use the AT and DOT). Giveaway is open to US only (sorry!) Giveaway is open from August 12- August 19 at 11:59pm EST. Winner will be announced August 20th.

To read Traveling With T’s review of The Roots of the Olive Tree, visit here.