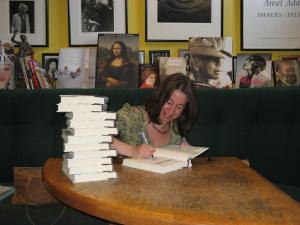 Jenny Milchman, author of Cover of Snow, came to Lemuria Book to sign and read from her debut novel.  While Cover of Snow is Jenny’s first published book- she is not new to publishing game. This is the 8th book she has written- but her first to be published. When she was college- age, her parents asked her what her plans were- and she told them she would like to live in the woods, build a log cabin and write poetry. While her parents felt that she had potential as a writer- they did point some flaws in this plan; namely the fact that Jenny had never built anything. After this, Jenny decided that perhaps pursuing psychology degree would be better. Her mother told Jenny one day that “she thought Jenny had talent, but it would take her at least 10 years” (before she became published). It took Jenny 11 years.

When Jenny began writing and looking for someone to represent her, since she felt her writing was very good- she sent her work to the people that represent Jonathan Kellerman. While she did not get the reply she wanted- she realizes that reading someone else tell her: “I did not want to spend that much time in your neurotic protagonist’s head.” She describes reading this “as the quote from the rejection letter that put the writing in perspective”. So Jenny goes back, worls different ideas, comes close to being published- but still; falling short of the goal.  Then after much time, things begin to go to Jenny’s favor.  Nancy Picard, after reading Jenny’s writing, tells Jenny this: “that she could not wait to finish, and if the novel does not disappoint, which I don’t think it will, would like to write a blurb and then send to my publisher.”

Jenny says that she loves first drafts “like Christmas morning, wedding day, finding out being pregnant, summer vacation, candy-wrapped ice cream sundae.” Cover of Snow, as published,  is in it’s 22nd draft. During the 21st draft, a scene was pointed out had a implausible air about it. Jenny, because she liked so much of that scene, simply changed the coffeepot to a programmable coffepot- and the scene was saved!

When asking Jenny about her writing space and routine- she informed the audience that she likes to write 2,000 words in the morning. And her writing computer is not a super-duper fancy gadget- no mam- Jenny writes on a computer than has Windows 98, is not internet-enabled, and backs up her work on floppy disks. Jenny also informed the audience that it usually takes her 2-5 months to write the first draft.

I asked Jenny if she would like to have Cover of Snow made into a movie- and if so, who would she want to play her characters? She said there was some early talk, even some talk of a possible made fo TV movie. As far as for who she pictures as Nora- she always liked Ashley Judd or Julieanne Moore- however, the character of Nora is younger than those ladies now; so she’s unsure of who would be the best person to play Nora if a movie was made now.

Look for Jenny Milchman’s new book, Ruin Falls, to be out in March 2014.

Jenny reading Cover of Snow to the audience