Ivy Marshall’s life is falling to pieces the same day she learns her younger sister’s life is coming together with a marriage proposal from her boyfriend. Ivy, while happy for her sister, cannot help wonder “what if” about her own life. What if she’d married the man her family wanted her to marry instead of Elliot? “What if” is a dangerous question, at times……

Ivy leaves Elliot to head back to Sunset Beach. Partly to help with her sister’s wedding, partly to get away from Elliot, and partly to think about life. Back in Sunset Beach, she does not want her family to know about Elliot- since they did not want her to marry him- they wanted her to marry Michael. Ivy figures she’ll see Michael at the wedding since his cousin is marrying her sister- but is surprised (and secretly pleased) to see that Michael is around for the summer.

Elliot is not taking Ivy leaving lightly- he takes to Twitter, one of her favorite social media sites, and begins tweeting to get Ivy’s attention. As the weeks go by, Ivy begins to see that Elliot is trying- he’s paying more attention- but what broke between them; she is unsure if can ever be fixed.

Ivy also has some hard truths of her own to deal with- her role in what lead to her family being hurt about her broken engagement, Michael, and the others she hurt in her past.

The Wishing Tree deals with hard issues with sensitivity and lightness: cheating, breaking hearts, growing up, disappointing family and finding yourself. Well-written, enjoyable, a story-line that is interesting and very readable.

Marybeth Whalen has done it again. Written a book that is light, funny; yet poignant and thoughtful. Themes of love, forgiveness, and moving on are discussed and weaved in and out of the story of Ivy and her life. Thought-provoking. Read- you will not be sorry.

*The author provided me with a review copy in exchange for a fair and honest review. All above opinions are mine alone. 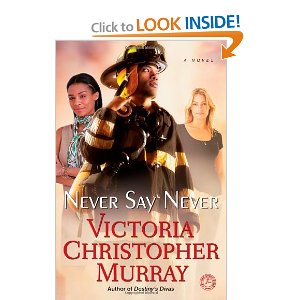 Would you or wouldn’t you?

That is the question that is asked in Never Say Never. It’s an interesting question because most people have very definite views on cheating. However, Victoria Christopher Murray takes this question and runs with it. She writes a story- told from the viewpoints of Miriam and Emily- and writes a tale that is emotional. It’s not an easy story to read- Never Say Never can make you question everything or reaffirm your beliefs.

The Red, White and Blue- Michellelee, Miriam, and Emily, have been friends since college. Each of them have a connection that they never thought would fail. Until the day of the fire- and the aftermath that followed. The ladies are having a get together that day- then Michellelee gets a phone call about a fire. Miriam and Emily are immediately worried as both of their husbands are firefighters. Shortly, they hear the news- Miriam’s husband, Chauncey, died in the fire.

All of the ladies, plus Jamal, Emily’s husband, are devastated. Jamal and Chauncey are close friends- and Jamal is taking it very hard. Emily keeps telling Miriam that she and Jamal will help Miriam with everything- the funeral, being there for her, the children. However, Emily is a child psychologist- and in the aftermath of the fire, she finds herself having to devote time to a child who becomes a client. Jamal makes good on his word, though. He visits, hangs out with the kids, and tells Miriam stories about Chauncey from days past.

During their time of grief, Miriam and Jamal begin sleeping together. And slowly, each person finds out- and the world that the Red, White and Blue had- the world of sister-friends begins crumbling.

Told from viewpoints of Emily and Miriam, the tale begins with Miriam telling the readers about her affair with Jamal. The rest of the book is the lead-up to the affair and the aftermath. Forgiveness, faith, fidelity, love, and more are themes of this book. After reading Never Say Never– I had very definite feelings and ideas about Miriam and Emily- however, this is a book that could lead to an excellent discussion amongst book clubs or even just girlfriends.

This book was provided by Touchstone Publishing in exchange for an honest review. All opinions above expressed are mine alone.