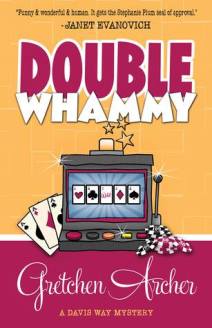 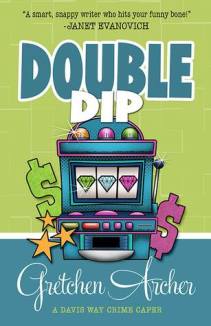 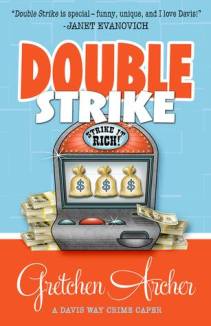 Hello readers of Traveling With T! If you’ve been sticking around for a while- you know that I like a funny book thrown in amongst my Southern Lit, psychological thrillers, and other reads. I can usually count on Henery Press for tickling my funny bone with LynDee Walker or Phoebe Fox reads- but my original funny girl was Stephanie Plum. Wise-cracking, Jersey-talking, Tastykake loving- Stephanie Plum.

A few months ago, though, I was introduced to someone who might fill my Stephanie Plum quota when I need a funny book- and I’ve already read the latest Plum.

Meet Davis Way- the heroine of the Davis Way Crime Capers by Gretchen Archer. Davis from Alabama, has an ex-ex husband and is always finding herself in some kind of trouble (usually trouble that will make the reader laugh!)

You should read Davis Way Crime Capers if:

1. You like to laugh. (A Lot). Between the roles that Davis plays in the Bellissimo Resort and Casino in Biloxi, MS- from dressing up a slot-playing guest, waitresses, being a body double, and other roles- Davis makes you feel part of the action- and sets the scene for laughter.

2. You like a small-town character. I live in a place that is like Pine Apple (where Davis is from and finds herself again frequently)- where people know your business, where you can’t keep secrets! I get the vernacular that Davis uses in describing Pine Apple- and I think many others will!

3. You like a series that is going places. Gretchen has 4 books out now- and her character, Davis, is growing with each book. While I do love my Stephanie Plum for many reasons- her inability to truly choose a romantic partner has been going on for too long. This is not the case for Davis Way.

4. You like an on-going joke. There are plenty to choose from in this: Davis’s habit of giving everyone nicknames, a particular character always messing up Davis’s name, and plenty more!

5. You fancy a heroine that is part stand-up comedian, part crew of Ocean’s 11, and hasn’t met a firewall that she can’t breach yet! Meet Davis. Enough said.

6. You like an ensemble cast. From Davis’s grandmother to her ex-ex husband and family (not to mention Davis’s own mom, dad and sister) there is always a few extra people in the mix- sometimes to help, sometimes inadvertently hindering Davis (you’ll have to decide who’s who!)

7. Did I mention this series is for you if you like to laugh? Seriously. That point should be mentioned multiple times.

I could go on and on- but I’ll stop there and allow you, the future readers of Davis Way Crime Capers, to get to know Davis on your own time. You’re welcome!