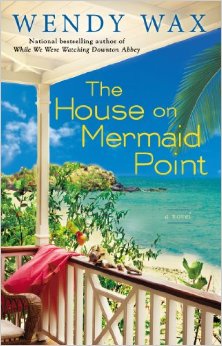 A few weeks ago, I had the pleasure of having an amazing giveaway of Wendy Wax’s latest, THE HOUSE ON MERMAID POINT (out July 1, 2014!) Today- the good times just keep on happening as Traveling With T has an Q&A with the amazing Wendy Wax- an author who entertains women and writes great books! Q&A with Wendy Wax:

Thanks for joining us and sharing news of your new novel THE HOUSE ON MERMAID POINT.

So many readers are delighted to have a chance to be back with Maddie, Avery and Nicole, the characters you introduced in TEN BEACH ROAD a few years ago. Was it difficult to get back into their lives?

You know, I thought it would be. I was still so caught up in the fun of WHILE WE WERE WATCHING DOWNTON ABBEY and readers’ response to it, that I began to question whether I’d be feeling “at home” with the reassembled ensemble as I had when I wrote OCEAN BEACH. As it turned out, I found myself immediately at ease when I started that first chapter and looking forward to finding out how they would tackle the challenges I knew were coming. I know it helped that I had already spent time with them while writing my holiday novella, CHRISTMAS AT THE BEACH.

Has a lot changed for the women of TEN BEACH ROAD since OCEAN BEACH?

There have been some big life changes, but the characters are still friends, still taking things one renovation at a time. The cast of “regulars” has gotten bigger as characters from the first book have become more involved from one book to the next and become known to readers. Mermaid Point becomes host to the entire Do Over cast and crew— some with small roles and others central to the plot. You’ll find everyone from Kyra, Dustin and Deirdre to Chase, Joe, Troy and everybody’s favorite, charming network executive Lisa Hogan, who once again claims the element of surprise as her ace in the hole.

For those who are just now discovering the novels these characters share, will you give us some background?

You bet. Readers first met Maddie, Nicole and Avery when the three were deeded ownership of Bella Flora, a crumbling historic home on Florida’s Pass-a-Grille Beach, in TEN BEACH ROAD. At that time, all they dared hope was that renovating and selling it would let them rebuild their lives and the bank accounts drained by a Ponzi scheme. They had no idea they’d end up living together for the next two summers, hammers in hand, starring in their own DIY reality television show, Do Over. Indeed, in their second book, OCEAN BEACH, the women—still in desperate straits financially–headed to Miami’s South Beach, with another project and cameras rolling to film their first season. In THE HOUSE ON MERMAID POINT, the show is about to make its on air debut even as they film their second season. This time they’re in the Florida Keys where they’re expected to turn Mermaid Point, the private island of aging, down on his luck rock legend William Hightower, into a bed-and-breakfast. Against his wishes, of course.

Rock ‘n roll and renovation? How did you arrive at that combo?

It started with again needing a character who, to begin with, could afford the sort of house that would make an interesting television setting. So I started thinking celebrity. Then, during my early research, I fell in love with the Florida Keys. I was headed to Key West when I was shown a private island in Islamorada that I just had to have. Then I needed a really high profile, extremely wealthy—at least at one time—mega star. Lots of musicians lived and partied in the Keys and before I knew it, I was thinking about some of my favorite bands and Southern rocker William “Wild Will” Hightower was born.

Who are some of your favorites?

It was a kick revisiting those times and walking down my own memory lane helped me imagine Hightower’s music being just as magical as that of the musicians I followed and the wild ride that is part of his past.

I may have had a bit too much fun with the musical memories called up during the writing. I actually ended up trying my hand at a ballad, Mermaid in You, one of the songs for which my mythical Hightower became famous. As part of the release of THE HOUSE ON MERMAID POINT, I touched base with two young musicians who are sons of a friend. Their group is the 10th Concession and they’re well known in the southeastern U.S. They looked at my lyrics and, while I was quickly demoted from writer to co-writer, they worked with me, created the music and now the song has been record-ed. It has its live performance debut along with the book on June 30th and will be available as a free download. I hope you’ll check it out. Info will be posted on authorwendywax.com as we get closer to the date.

I am happily up to my neck in a new book. But I’m still debating so many different ideas that I don’t want to share too much yet. Lots keeps changing. It is, however, set in Manhattan and at New York’s Lake George. More to come . . . As always, I’ll be sharing more book news on my site, on Facebook and other places. I hope everyone will visit with me in those spots. Also, appearances for and the latest about THE HOUSE ON MERMAID POINT will be shared online along with giveaways and other updates.

Thank you! I appreciate being able to share THE HOUSE ON MERMAID POINT with you and visitors to your site.