Yes, folks, Traveling With T finally has the post up about BEA. I know, I’m so late with this post- truly, I’ve been wanting to write it every day. But, I was waiting on my box of books to arrive- and well UPS did not get the mental messages I was sending about hoping my books would arrive faster 🙂 🙂 So, here’s the whole event- from soup to dessert!

Arrived late Wednesday night due to some airport issues- which is not fun, but I hung out in the airport, saw some good looking books- and chatted with some people. I also met the airport hero- a kind and thoughtful person who was extremely helpful in my navigation of the Atlanta airport. After eating Subway Wednesday night (seriously, it was the best thing ever- since I was on standby flights, I didn’t have time to eat and had a combo of pretzels, water, half a can of Coke and Teddy Grahams earlier in the day) when I got to NYC, hailed a taxi and just hoped that I would arrive safe and sound at the hotel. I did and I met Kristin @ Always With a Book and we hugged like we had known each for years! Then a quick elevator trip to the room, threw the bags on the bed, and hightailed it to find real food!

Thursday (The First Day of BEA) 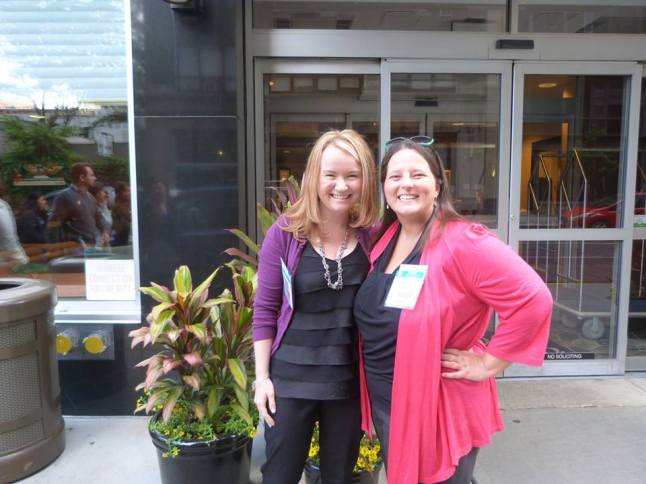 I was a bit worried I’d be tired (I didn’t get to bed till after 12 and had been up the previous morning at 3:30) so when I woke up and felt pretty good- I was glad. Dressed for BEA, went and had breakfast- then took the shuttle bus to the Javits Center. After dropping off suitcases at the luggage area, we took our first step on the floor. No matter how much I looked and anticipated what the floor was going to look like at BEA- I was not prepared. I probably walked around most of Thursday with an OMG look on my face. Within a bit, we met Jenn from Jenn’s Bookshelves– and getting to see her in person was so nice. Jenn had been the woman of the hour with all the BEA info she had graciously supplied me with before BEA- and I was just glad to get to chat with her for a minute.

I quickly got in line for the Ann M. Martin signing- because as you know- Ann is a hero of mine. The Babysitter’s Club was a great introduction to reading- and she’s always held a soft space in my heart because of that. I fangirled a bit, told her that she was my introduction to reading and passed on thanks from my mom for occupying me during the torturous time of the chicken pox!

Next, was Hank Phillippi Ryan. Me and Kristin had to have the next book TRUTH BE TOLD. It was on the absolute list. Then one of the BEA workers hands Kristin the whiteboard with the info and we are the first 2 people in line! Yes! Quickly we met Kristopher from BOLO Books– a fellow Hank fan, so we liked him immediately. Kristopher was a walking advertisement for BOLO Books- which was neat- even later in the day, when I would be scanning the crowd, if he was nearby- I could see his outfit and knew where he was! After getting our books signed and some pictures of Hank, we moved on to the next thing.

BEA was not playing fair that day- there was a Kate White book signing and a galley drop going on at same time. I love Kate White and wanted to meet her- and Kristin went to galley drop- so it was win/win!

Then we ran to go meet Katie and Sarah from Little Bird- and had a fabulous time chatting with the ladies. Katie and Sarah- warm and funny- intelligent and a blast to talk with!

At this point, some lunch was needed- so a quick trip to the lunch cart- a sandwich, some water and a bag of chips and we were revived and ready to face more BEA!

Next on the list: Alafair Burke, Mary Kubica, Allison Leotta- Alafair’s newest, ALL DAY AND A NIGHT had been on my mind for weeks- Mary’s THE GOOD GIRL had caught my eye because Mary is such fun to talk with on Twitter and Allison- SPEAK OF THE DEVIL I had previously read, but wanted to meet her to tell her how much I enjoyed the book! 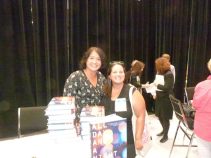 After checking the schedule- we saw that Liane Moriarty’s book signing was happening soon. Conflicting reports was happening of whether it would be THE HUSBAND’S SECRET or BIG LITTLE LIES- so a quick check and it was the latter. We got our books- chatted with Liane for a moment- and moved on! 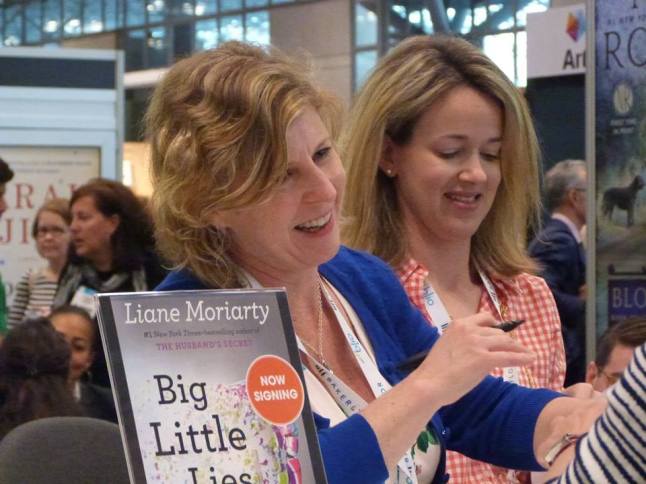 My last book signing of the day was Gregory Maguire. My brother loves his books and I stood in line to get his next book autographed just for him. Standing in line for awhile, I began chatting with some people around me (Kristin was picking up some more galleys!) and met a nice fellow who was instructing me on the different aspects of horror books- and really made me think about the genre as I mostly dismiss it because I think of things such as Friday The 13th!

Same routine- breakfast and shuttle ride. Got to Javits center and begin making our way around the floor. Had a few books given to us, met a couple of nice publicists, and dropped by the Harlequin Booth for a bit. Then it was time to meet Mary Higgins Clark- Kristin wanted to stop by some other booths, so I got in line and saved us a place- and began chatting with a mommy/children’s blogger- and she was filling me in on the Wednesday events- the Blogger day.

After meeting MHC, and thanking her for the great books- it was getting lunch time again. We had the same lunch (it was quick and easy) and prepared for the Speed Dating event. That was the event to go to! Siting down for over an hour, having books handed to you, getting to meet publicists and chat with other people at table- well, it was so nice. A definite must for next year! 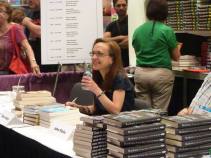 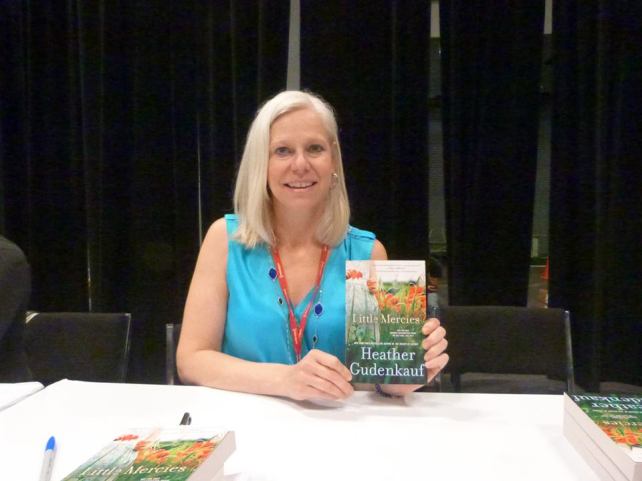 The last signing was Stan Lee- which went fast since he presigned and then I was able to run over to Elin Hilderbrand’s booth to snag up a copy of her first ever winter book! (Plus a Corona!)

Because Kristin had never been to Serendipity 3, I insisted we go and have supper (plus the Frozen Hot Chocolate!) It did not disappoint! 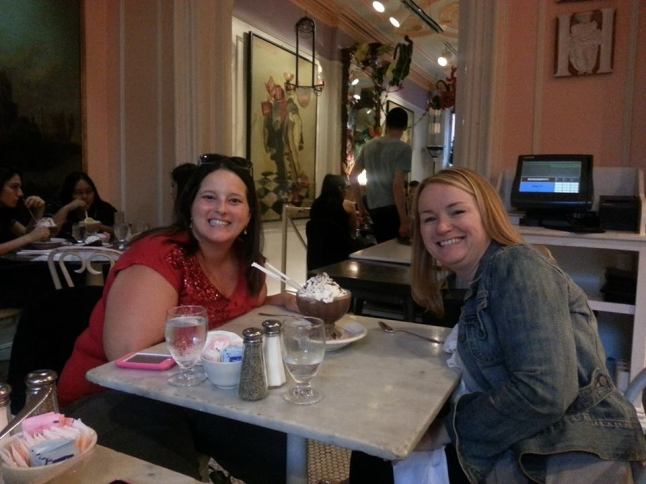 We were a bit speedier getting through breakfast this morning- and we wound up making it to Javits Center before we could even get in. I was not sure what BookCon would be like, but after 2 days of fairly easy navigation around the Javits Center and only being pushed occasionally- I was not prepared for what BookCon would bring. It was nutty! I went to the RL Stine book signing- picked up a signed book (not personalized, but that’s ok) and then headed to find Kristin. We also were able to snag copies of THE MATCHMAKER from Little Brown and a great lunch recommendation (Gotham Market) from Megan D!

And oh my stars- getting to meet both Sally Koslow and Beatriz Williams who were running the Penguin Truck, selling books for one hour each, was so wonderful. Both ladies just oozed warmth and charm! 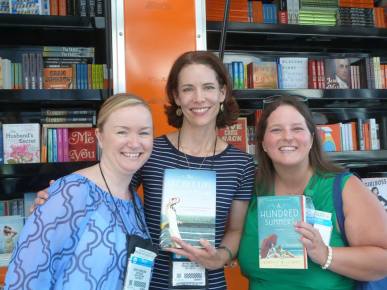 After a delightful lunch, we headed to Times Square to see what shows were on sale- and while one man was pushing Cabaret very hard, I was more into Mamma Mia… Until I heard that Aladdin- the one show I had been dying to see was on sale- and we snatched those tickets up so fast and quickly headed to the show. Which was wonderful- the Genie is hilarious, the sets and costumes- so bright, so stunning, so just worth seeing! The songs, the dancing- oh I had a great time! After that- we did more walking, popped into a store to buy a souvenir, picked me up a 5 buck pashmina, then found some cupcakes for later in the room!

All in all, I would totally go back to BEA again!

And finally- here is the picture of my book haul. I know there has been some negativity about showing book hauls from BEA in the bloggy book world, but I do want to show them off- because these publicists did not give us these books so we would never show them- they want us to show them to our friends, our bloggy followers, to whoever!

There are several I’m very excited for and some that a publicist convinced me I would like. I’m eagerly awaiting my bookish next few months and I start to read the books from BEA 2014.