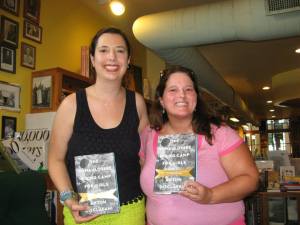 The Yohnalossee Riding Camp for Girls was on many people’s lips over the summer. Quickly catching the hearts and attentions of various book clubs, Yohnalosse for debut author Anton DiSclafani was a book that was enjoyed by many. I met Anton at Lemuria Books in Jackson over the summer- and enjoyed listening to her talk about the writing process. Anton and I may not have met, though, if her book signing tour had not been extended past the original 14 locations- but as the summer went on, her tour was extended! I was super excited to see that Lemuria made the list for the extension because everyone had been telling me “you have to read this”! Confession: I’m blogging about meeting Anton- and yet still haven’t read her book. However, it’s coming up fast in my TBR list!

Anton talked of how she was interested in the Great Depression after doing a bit of research on YRCFG. When asked if she has read the book since she wrote the book, she confided that she had not read Yonahlossee in over a year (since final edits).  Someone in the crowd questioned Anton on the best parts of the book tour- and Anton says ” The audience, the interaction is the best part. The traveling is the annoying part.”

Anton has started writing a new book- but talks of how different the writing process is since she’s published. When she was writing YRCFG, she did not get many opinion of feedback (well at least till the editing part). Now, she has people that have opinions and suggest feedback- which makes writing a different process for her.  Anton started YRCFG when she was 24- she’s now 32. Writing YRCFG was a process- and one Anton enjoyed!

When asked if she had a #literarycrush or #literaryconfessions- Anton confessed that her crush is Mr. Rochester and that her confession is that she did not like War and Peace (however, she loved Anna Karenina). Anton’s pick for best book of 2013:  Brewster by Mark Sloulka.

2 thoughts on “Meeting Anton DiSclafani, author of The Yonahlossee Riding Camp for Girls”