Thrilled to be part of the You Will Remember Me by Hannah Mary McKinnon blog tour! My stop has an excerpt from this novel- so read the excerpt and prepare to get the book ASAP. 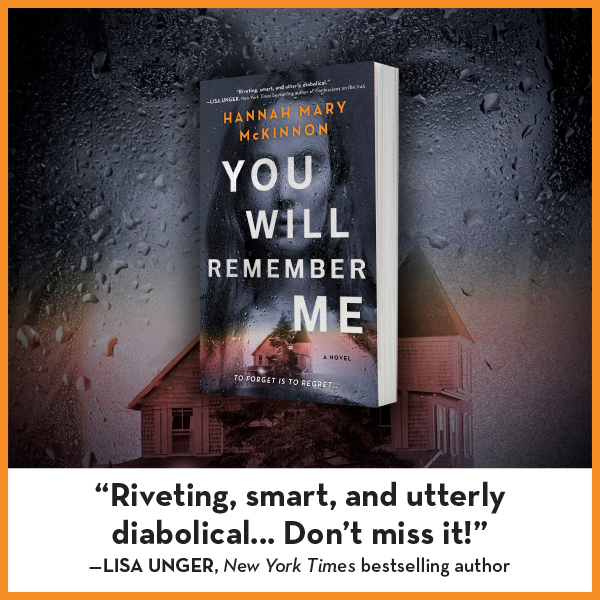 Chapter 1—The Man from the Beach

Cold. Cold was the first word that came to mind. The first thing I noticed when I woke up. Not a slight, uncomfortable chill to give me the shivers, but a cramp-inducing, iced-to-the-bone kind of frozen. I lay flat on my stomach, my left ear and cheek pressed into the rough, grainy wet ground beneath me, my entire body shaking. As my thoughts attempted to assemble themselves into some form of understandable order, a wave of icy water nipped at my bare toes and ankles, my instincts pulling my feet out of reach.

I had a sudden urge to get up, a primal need to take in my surroundings and assess the danger—was I in danger?—but the throbbing pain deep in my head made the slightest effort to shift anything seem impossible. Lifting a finger would be too much effort, and I acquiesced, allowing myself to lie still for another few freezing seconds as the frigid water crept over the balls of my feet again. When I blinked my eyes open, I was met by a thick, fuzzy darkness enveloping me like a cloak. Where the hell was I? And wherever it was, what was I doing here?

When I lifted my head a fraction of an inch, I could barely make out anything in front of me. There was hardly a noise either, nothing but a gentle, steady rumble in the background, and the cry of a bird somewhere in the distance. I made my brain work its way backward—bird, rumble, sand, water—and the quartet formed the vaguely cohesive image of a beach.

Searching for confirmation, I inhaled the salty, humid air deep into my lungs as another slosh of water took aim at my calves. This time the discomfort was enough to push me to my feet, and I wrapped my arms around my naked torso, my sopping board shorts clinging to my goose-bump-covered thighs. An explosion of pain in my head threatened to send me back to my knees, and I swayed gently, wishing I had something to steady myself with, willing my body to stay upright. As I pressed a hand to the side of my skull, I let out a quiet yelp, and felt along a two-inch gash in my scalp. My eyes had adjusted somewhat to the lack of light, and my fingertips were covered in something dark that smelled of rust. Blood. How had I…?

Another low rumble made me turn around, shuffling slowly in a semicircle. The behemoth effort was rewarded by the sight of a thousand glistening waves dancing under the moonlight like diamonds, the water stretching out and disappearing into the darkness beyond. As my ears tuned in to the rhythmic whoosh of the waves, my mind worked hard to process each scrap of information it took in.

I’m definitely on a beach. It’s nighttime. I’m alone. What am I doing here?

Before I could answer the single question, a thousand others crowded my brain, an incessant string of chatter I couldn’t stop or get away from.

Where is everyone? Never mind them, where am I? Have I been here long? How did I get here? Where was I before? Where are my clothes? What day is it?

My legs buckled. Not because of the unfamiliar surroundings, the cold burrowing its way deeper into my core, or the pain in my head, which had increased tenfold. No. My knees hit the sand with a dull crunch when I realized I couldn’t answer any of the questions because I couldn’t recall anything. Nothing. Not the tiniest of details.

A frown settled over my face as I put my phone on the table, pushed the bowl of unfinished berry oatmeal away and stretched out my legs. It was Saturday morning, and I’d been up for ages, too eager—too hopeful—to spend a day at the beach with Jack, but those plans had been a literal wash-out. The start to the summer felt capricious, with this second storm in the last week of June poised to be much worse than the first. I’d convinced myself the weatherwoman had exaggerated or got her forecast completely wrong, but clouds had rolled in overnight anyway. As a result, I’d been unceremoniously woken up at two thirty by a trio of bright lightning, deafening thunderclaps and heavy raindrops pelting against my bedroom window.

At first, I’d pulled my pillow over my head to deafen the noise, and when that didn’t work, I rolled over and stretched out an arm. The spot next to me was empty and cold, and I groaned. Jack hadn’t come over to my place as I’d hoped he would, slipping into bed and pressing his naked body against mine. I’d buried my face back into my pillow and tried to ignore the tinge of disappointment. We hadn’t seen much of each other this past week, both of us too busy with our jobs to spend more than a night together, and I missed him. Jack had called the day before to tell me he’d be working late, finishing the stain on the cabinets he’d labored on for weeks before his boss had to let him go. Apparently expensive custom kitchens weren’t in as high demand in Brookmount, Maryland as originally thought.

“Because I made a commitment. Besides, it’ll help when I need a reference.”

Typical Jack, always keeping his word. He’d bought a lottery ticket once, and the clerk had jokingly asked if he’d give him half of any winnings. Jack had laughed and shaken the man’s hand, and when he won ten bucks on the ticket, had promptly returned to the store, and paid over the share as promised. His loyalty was one of the many things I loved about Jack, although part of me wished he weren’t quite as dedicated to his soon-to-be ex-boss.

“You could come over to my place when you’re done,” I said, smiling slowly. “I’ll leave the key under the umbrella stand. I don’t mind you waking me up gently in the middle of the night…or not so gently.”

Jack laughed softly. The sound was something I’d fallen in love with eighteen months ago after our eyes had met across a crowded bar, the mother of all uninspired first-encounter clichés, except in this case I’d been forced to admit clichés weren’t always a bad thing.

“It’ll be really late, Lily,” he said, his voice deep. His English accent was something of a rarity in our small coastal town, and still capable of making my legs wobble in anticipation of his next words. “I’ll go for a quick swim now, then finish up work. How about I come over in the morning? Around nine? I’ll bring you breakfast in bed.”

“This time I’ll order three stacks to make sure I get some.”

“Pancakes or sex?” I said, before telling him how much I loved him, and whispering exactly how I’d thank him for waking me with sweet weekend treats. I’d hoped it might change his mind and he’d come over earlier, except it was ten now, and he still hadn’t showed. It was odd. Jack detested being late as much as he loved being early. He often joked they set Greenwich Mean Time by his father’s old watch, which Jack had worn since his dad passed a little over a decade before we’d met, when Jack was only twenty.

I checked my phone again. Jack hadn’t answered either of my calls, another anomaly, but I tried to talk myself into believing he’d worked late into the night to make the final good impression he wanted, and overslept. Maybe there was a line at Patti’s—the restaurant was slammed every weekend—and perhaps his phone was set to silent.

I picked up my bowl and wandered to the kitchen. My place was the smallest of six apartments, a tiny but well-maintained one-bedroom in a building a few miles from the beach, farther than I’d planned, but the closest I could afford. I’d lived there for almost five years, had furnished it with an eclectic assortment of third-hand furniture, my favorite piece a royal blue microfiber sofa I’d bought for fifty bucks, and which Jack swore was the most comfortable thing he’d ever sat on. Whenever he sank down into it and pulled me on top of him with a contented sigh, I’d tease him about what made him happier; the squishy, well-worn cushions, or me.

The image made my frown deepen. Where was he?

Excerpted from You Will Remember Me by Hannah Mary McKinnon, Copyright © 2021 by Hannah McKinnon. Published by MIRA Books

*Have you added You Will Remember Me to your want to read list?*