Summary: Kate, Aubrey, and Jenny. They first met as college roommates and soon became inseparable, even though they are as different as three women can be. Twenty years later, one of them is standing at the edge of a bridge . . and someone else is urging her to jump.

How did things come to this?

As the novel cuts back and forth between their college years and their adult years, you see the exact reasons why these women love and hate each other—but can feelings that strong lead to murder? Or will everyone assume, as is often the case, that it’s always the husband?

This book kind of flew under my radar and then BOOM- I was seeing it everywhere! So, I was pretty excited when this book showed up in my mailbox.

COVER. What is it trying to show? The colors. The uniqueness of it. 2 thumbs up.

The story. After I finished it, I skimmed other reviews. While I wouldn’t say the first part of the book was slow- it was a lot of ground laying for later parts in the books. It’s worth it when a person goes to the trouble that Michele did to show these ladies as friends- young, college age, wanting the world to be everything they hoped and dreamed… only to know that the sh*t was going to hit the fan at some point for at least 1 of them.

The opening. Maybe I’m wrong for admitting this- but when the person said “Go ahead and jump.” I laughed. It was so unexpected, so delicious because I knew whoever it was had had it UP TO HERE with that person and was letting them know.

The ending. I was reading this book by the pool and the pages were dwindling and I still did not know for sure who the bad person was. And then it was revealed. And I loved it.

Bottom line: I can’t say any of the characters was very likable. Each character had something intriguing about them, and yet they also had characteristics that almost made them repulsive at times. But I loved getting behind the scenes of this twisty Ivy League group- seeing all their dirty secrets.

**It’s Always The Husband was a #FuturisticFriday selection from Katie at Doing Dewey and a Ten Mysteries To Keep You On Your Toes Through Summer book from Erin at Deep South Magazine’s guest post at Traveling With T.** 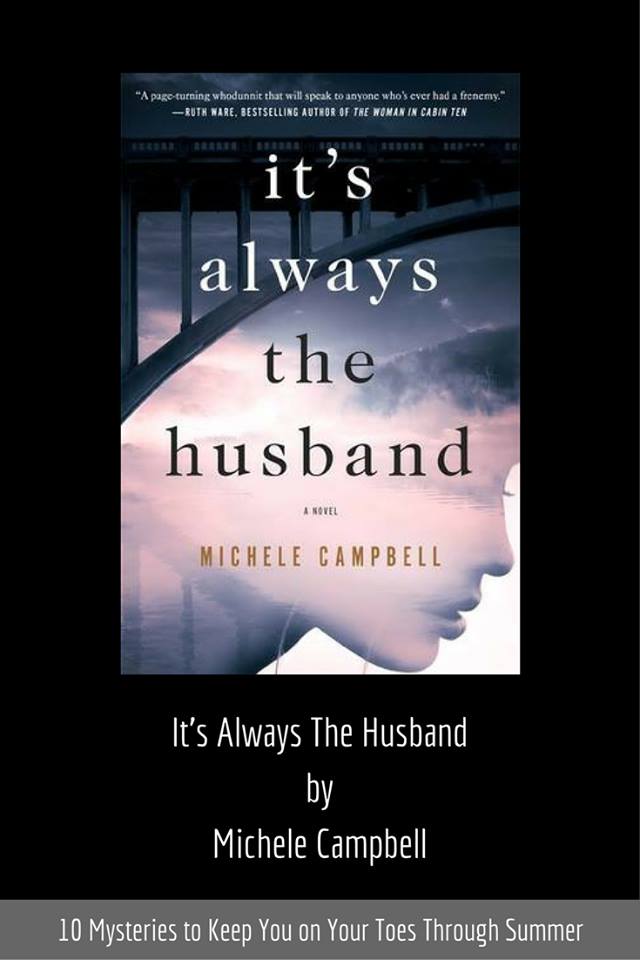 *Will you be checking out It’s Always The Husband from your local library?*

7 thoughts on “It’s Always The Husband by Michele Campbell”