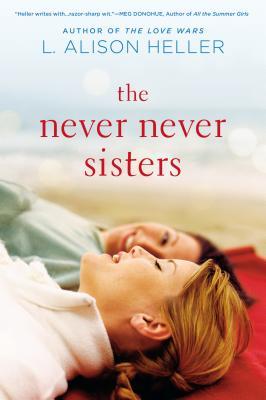 Today, at Traveling With T, I have an Q&A with L. Alison Heller- the author of THE NEVER NEVER SISTERS. When I heard about this book, I was so curious- I loved the cover, wanted to know the meaning behind the title. Basically, I just wanted to dive into this book and find out all it’s secrets!

My review will post in the next few days- but I just couldn’t wait to share the Q&A and the giveaway!! The giveaway is US only and the details are with the Rafflecopter link (after the Q&A!)

Q. What was the original inspiration for the story?

A. It all started with Dave and his betrayal. And, as they always do, things twisted and turned from there.
I understand—on a gut level—that parental rush to defense when a kid does something horrible. But what about when it’s someone you married? If you think you know someone better than anyone—and then you learn something that disrupts that narrative—do you change the narrative or do backbends trying to smoothly incorporate the new fact?
I think people probably do both—and maybe degrees of each every day—and I wanted to explore that. And as readers of THE LOVE WARS might know, I’m a bit fascinated by the big law firm culture. During my time working at various offices, there were colleagues who got disciplined for getting caught doing (ahem) untoward things. I never stopped wondering about their spouses. I thought it would be especially interesting if the pair dealing with such a conflict was a “golden couple”: supremely blessed on the surface with some hidden baggage.

Q. There are a lot of communication problems in the book—occasions where characters either don’t say what they’re thinking or say too much or build walls in the face of someone’s else’s admission: Paige and Vanessa, Paige and Dave, Sloane and . . .almost everyone.  Which character’s style do you most relate to?

A. Like most people, I have a fairly constant inner monologue that stays in my head. In truth, I relate to all the characters from Paige—who’s a bit obsessed with helping people communicate that nugget of truth—to Frankie, who wants to hide behind a newspaper and sip information like it’s an 180 degree cup of coffee from McDonald’s.
The right information communicated between the right people is how intimacy is formed. Don’t you feel closest to the people whom you can be completely honest with, and whom you feel can be honest with you? Navigating this—what you share with those close to you and what you keep for yourself—is, I think, definitely more art than science for most people. We share because we’re moved to by a connection or moment or someone else’s admission, but there are also times when we share—or don’t—as a matter of strategy.
At the beginning of the story, Paige would claim that she knows everything that matters about both her mom and her husband. She’s willing to accept certain areas of silence between them because they’re not critical to her here and now, but as Paige delves deeper into family secrets, she starts to see that those silences have had a great impact. And that she’s troublingly capable of maintaining her own strategic silences too.
The book is really about the limits of knowledge and communication and how we assimilate those limits. How do we each trust and build our own truths to better connect to the people in our lives?  And when do we limit what we share for self-protection?

Q. At the end of the book, Paige has loosened the strings of some of those crucial relationships and reinforced others. Without giving too much away, were you trying to explore what’s forgivable in a marriage?

A. Absolutely. And explore how people reconcile two fundamental and opposing truths:
That there’s a basic, human need for attachment and connection.

That the human experience is a singular one.
I think so much of life is reconciling these two facts. As Orson Welles said, “We’re born alone, we live alone, we die alone.” (Cheers, everyone!)
About halfway through writing this novel, I had just dropped off my daughter at school when I passed a couple on the street corner. They were—rather romantically and dramatically—kissing each other goodbye before heading off to their offices or wherever they were going. They looked so unbearably sad about parting, and then, in the moment after they did, the woman blithely skipped down the steps to the subway as though the only thing on her mind was not missing the train. It was like seeing two different people.  (For a while this was the opening scene in the novel.)
There’s this romantic ideal about two people going off into the sunset on a horse (or in a carriage or a flying convertible like in Grease). But you know once they’ve been on that horse for a while, someone will get thirsty when the other will want to keep going until they reach the destination. Someone will want to help that guy on the side of the road and the other will think he’s a serial killer. Everyone makes bargains in their relationships. Everyone lets their principles slide or evolve at some point to honor their connections—it’s just a question of knowing where your lines are at any given moment.
Because, as the above Orson Welle’s quote ends, “ . . .only through our love and friendship can we create the illusion for the moment that we’re not alone.”

Q. It was so interesting how Paige, a marriage counselor, helped couples find their way back to each other as she grappled with issues in her own marriage. At one point she says to Percy, “I’m not like my clients.” Did you make her a marriage counselor to provide that contrast?

A. This is an especially funny question because Paige did a lot of floundering in the early drafts, before she became a marriage counselor. She tutored a bit for standardized tests. She dabbled in grad school (medical, dental) and she spent a lot of time and effort beautifying and mixing up health shakes filled with things like flaxseed and kale protein powder. (I don’t know if there is such as thing as kale protein powder, actually. But it does sound healthy and it would have totally been up Paige’s alley.)
None of that felt one hundred percent right, though. Paige had to be a woman of opinions, someone who thought she’d figured out all the answers for relating. I’m a divorce lawyer and mediator as well as a wife—how couples relate and bond or dissolve in the face of  external forces and internal conflict is of lifelong fascination to me.
Paige’s job change felt very natural. It made a lot in the story click and, really, she was much happier and stronger as soon as we gave her that job. (My editor and I both breathed a little sigh of relief.) Frankly, it was nice to give her that anchor, because she gets quite a lot thrown at her, including that being a marriage counselor doesn’t give you an automatic answer guide to your own relationships.

Q. I really enjoyed Giovanni. Whenever he showed up in the book, I laughed. Was that a deliberate choice to make him light?

A. I’m so glad! Giovanni made me laugh too. He was probably the most fun to write. (Although Vanessa was a close second.)
I’ve known (and envied) people like Giovanni, who just don’t seem get in their own way. Initially Paige underestimates him because of the games and the jokes, but really, he’s able to distill things to their core simplicity and talk about it, which is a great ability.
And, yes, Giovanni provides some much needed contrast to the Reinhardt women. He’s reductive where Paige is alternatively oblivious and hyper-aware. He’s sunny where Sloane is moody, and he’s an open book, in stark contrast to Vanessa. To me, Giovanni’s lightness is personality, but also due to how he was raised. He is open and communicative because that’s who his family is.


Q. What surprised you the most in writing the book?

A. I love this question because being surprised while writing a novel is unavoidable, as well as one of the best parts.
Aside from how very many drafts it took, I’d say the biggest surprise was the evolution of certain characters. A lot shifts as I draft, but one constant here on the journey from idea to completed manuscript was the substance of Dave’s “lie” and how it impacts Paige and Dave’s marriage. I was not expecting to become as fond of Dave as I did, or that there would be such genuine compatibility between him and Paige. I’m so glad I stuck it out with him, because it complicated Paige’s choice and forced her to explore her personal belief system: what makes one transgression forgivable and another not? I’m very curious how readers felt about Dave throughout the book, so please—shoot me an email. I’d love to hear!
Vanessa surprised me too. Her journal entries kept getting deeper and deeper. Finally my editor suggested I expand her points of view in the contemporary timeline, which, in my opinion added another layer of dimension to the story. Vanessa is a little tricky: she builds massive walls and is also incredibly, piercingly honest, especially in her journals. I loved writing those entries; I think a lot of people tap into something different voice-wise when they write and that was very liberating to explore how open and raw she was.

Obviously this is primarily Paige’s story, but Vanessa helped THE NEVER NEVER SISTERS come together. She mines a lot of the themes I wanted to explore—how the struggle to find your own truth dovetails with the struggle of those closest to you, how one’s own narrative and identity impacts parenting style and experience and the role of familial expectation in all of it.

*Special thanks to L.Alison Heller and Danielle from Wunderkind for the Q&A opportunity!

And now for the GIVEAWAY!

1 copy of THE NEVER NEVER SISTERS by L. Alison Heller (US ONLY) up for grabs! Check the Rafflecopter Link for ways to enter. Giveaway ends June 10th.

4 thoughts on “Q&A with L. Alison Heller, author of THE NEVER NEVER SISTERS (plus giveaway!)”