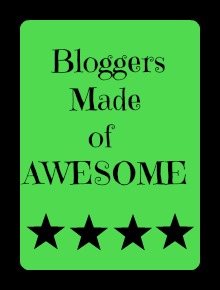 This week, I have Wesley from @ Library Educated as the Blogger Made of AWESOME! I can’t take credit for finding Wesley- Ashley from Closed the Cover introduced me to Wesley and a bloggy friendship was quickly made. Read on for the details of how Wesley named her blog and much more!

Wesley- when did you begin blogging?

My very first blog post was October of 2013. So I’m a baby blogger, still trying to figure a lot of things out!

How did you come up with the name Library Educated?

It actually comes from a story that Ray Bradbury would tell. He graduated high school during the Great Depression and his family had no money to send him to college. So he would go to the library for hours every week and read constantly and teach himself everything he could. He said that the library raised him and gave him a better education then he could have ever received at college. I am beyond blessed to have access to great education but part of me is a little jealous about Ray’s system. (Ray and I are on a first name basis, as you can see. I love him so).

What are your thoughts on blogging today in an ever-changing book-ish world? Are blogs helping other readers connect with good books?

I think book bloggers are doing amazing things. I know I’ve read books I wouldn’t normally pick up because I’ve seen people rave about it on their blogs. I’m not a writer, but if I was I’d be encouraged by the amount of booklovers on the web who are willing to be my reader/reviewer/fans!

You always hear people in the media talking about how no one reads anymore and what it’s doing to us as a society. But I think if people look at the amount of book bloggers and the amount of fans that are out there, they’d recognize that the printed (or digital) word is alive and well and we are better people for it.

When you are not blogging (or reading!)- what do you like to do?

I love watching my favorite TV shows (Justified, Supernatural, Archer), doing yoga with my best friend, sewing (even when the results are subpar), spending time with friends and family and plotting my next vacation on Pinterest (this one can get a little obsessive).

Do you have any #literaryconfessions?

1. I totally judge a book by its cover. If the book cover is two people kissing, or someone’s mostly naked I assume that the writing isn’t great and the publishers are hoping that you will be drawn in by scandal and will overlook a subpar. I’m not a prude; I just don’t have time for bad writing. (Have I been burned by this mindset before and missed great books? Maybe. But it’s a risk I’m willing to take).

2. I refuse to read the Twilight series, but my sister made me watch the first movie with her. The part where the vampires cook food for Bella and they make Italian food because they’re guessing she’s Italian from her name and they don’t really know how to deal with cooking for someone who eats food made me laugh pretty hard. So hopefully that parts in the book or I just confessed to that for no reason!

Do you have a #literarycrush?

Philip Kerr has a detective series based around a man named Bernard Gunther, and I guess he would be the closest thing that I have to a literary crush. Bernard is a former police detective who loses his job after he refuses to join the Nazis so then he becomes a private investigator. He’s clever, a little cocky, a little bitter and cynical and is always trying to make the best of his increasingly uncomfortable position in society and the bad hands being dealt to him. He loves the ladies, to smoke and to drink whatever liquor he can find in war torn Europe, he’s very noir and conflicted and complicated and I like it!

What books are you looking forward to reading in 2014?

“Hollow City” by Ransom Riggs, “The One” by Kiera Kass, “The Crane Wife” by Patrick Ness and then some that have been languishing on my TBR pile for a while: “The Golem and the Jinni”, “Guns, Germs and Steel” and more and more.

What is a book (or 2!) that you’ve read and LOVED- but did not get positive reviews?

I can’t think of an instance where this has happened, to be honest. I can give you an example of the exact opposite though! I read “Fault in Our Stars” not long after it came out. I thought “Well, that was an interesting premise for a book, not too shabby” and then kind of forgot about it. Then suddenly it was EVERYWHERE and people were just bananas for it. It isn’t that I didn’t like the book; I just don’t quite understand the massive love-fest that it is getting. (It’s possible that I’m just old and cynical and that being over 20 I wasn’t the target audience for the book). But anytime someone finds a book they love I’m glad they shout it from the rooftops.

What is the best part of the book- the cover? The opening line? Or the ending?

You have a beach vacation planned. What are the 3 books that you must bring?

I do have a beach vacation planned! (Hurry up August; I need some Mexico in my life!) The 3 books I will be bringing is “How the States Got Their Shapes” by Mark Stein, “The Beach” by Alex Garland, and “The Lost Continent: Travels in Small Town America” by Bill Bryson. I also might bring the Kindle…just in case. Running out of reading material on a laid back vacation is a nightmare scenario for me!

Are you an e-book or tree book lover? Or does it not matter?

I really prefer paper. I recently came into a Kindle, and I don’t mind it. However if there are footnotes or it’s a more serious topic matter I always wish it was in paper. I have really enjoyed the dictionary feature that the Kindle has, it’s saved me from a few google searches. I think there is room for both in a reader’s life; the important thing is that you are reading.

How do you find other blogs to read? Recommendations of other bloggers?

The first way that I found other blogs to read was to see who else was on Closed the Cover book tours (that’s how I found you!) and then through Bloglovin. Also I always scan the comments sections of blogs I already read to see if anyone else commenting is a blogger who might have a blog that could interest me.

What is a book that you’ve wanted to read, but just haven’t found the time?

I became a Neil Gaiman fan in the last year or two and I really want to read all of his Sandman material. However there is a lot of it, and I hit the wall on about #8. I need to get back at it but I’m having a hard time justifying a serious time commitment for a series that I can’t really utilize for the blog. Ugh, #bookbloggerproblems (haha).

2 thoughts on “Bloggers Made of AWESOME: Wesley @ Library Educated”