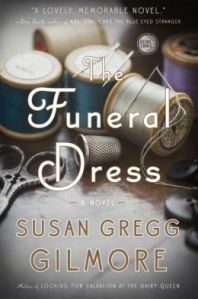 Sometimes family is found in the most unexpected places…..

When Emmalee meets Leona at the shirt factory, neither knows how much their life will change. Leona is gruff with Emmalee at first, but soon takes her under her wing- showing her tips and tricks to sewing the collars and other things. One day, Leona asks Emmalee to bring her baby to live with Leona and Curtis, her husband. The next day, their life is changed forever.

Leona has been busy sewing slipcovers and getting Emmalee’s and Kelly Faye’s room ready- so the last thing she needs is a delay in cooking her famous hashbrown casserole for the church. But, it happens and Leona is busy rushing to get things ready for church. On the way to church, while Leona is worried about being later, her husband does not see the log truck drifting in his lane. When he does see the truck, he tries to move over, but moves too far- then loses control. Curtis and Leona die on the way to church.

Emmalee knows that when Mr. Fulton comes to the house, death is in the air. Her daddy, Nolan, helps Mr. Fulton with transporting of the bodies. Emmalee is trying to get Kelly Faye to sleep, and hates to hear the arrival of Mr. Fulton- but especially hates to hear that the bodies are Leona and Curtis. Emmalee mourns the loss of Leona, the one person who believed that Emmalee could be a good mother. Emmalee decides to make her friend a funeral dress, something nice and wonderful for her dear friend, Leona.

Many in the town are against Emmalee, unmarried with a baby, making a funeral dress for Leona, a woman who was church-going. Emmalee is determined to make the dress, though, and she sets out to do just that. Emmalee knows that her friend deserves a beautiful dress, and Emmalee knows that despite her background- the dress is for her to make. No one else would take the time or the care with the dress the way she will.

While Emmalee is making Leona’s dress, she begins to learn more about Leona’s life- the hopes and disappointments- and why Leona decided to ask Emmalee to live with her. Emmalee also begins to realize how much she wants to be a good mother- to provide Kelly Faye with the life she did not have. People in the area, though, have other plans for Kelly Faye and those plans do not include Emmalee. Can Emmalee find the strength to stand up to the town? With the help of an unlikely ally, Emmalee might just be able to.

The Funeral Dress weaves together themes of loss, hope, desire for a better life, finding strength and faith to create a story that is heart-warming and an intimate look at life for women working in a factory. Susan Gregg Gilmore takes two characters that, at first glance have nothing in common, and creates a story where they both play a pivotal role in the others life. Highly recommended for book clubs and fans of Southern Lit.

*This book was requested through Netgalley. All thoughts and opinions are mine alone.

2 thoughts on “The Funeral Dress by Susan Gregg Gilmore”