Summary: The #1 New York Times bestselling author presents a new novel of a mother and a daughter, of ambition and romance, and of a traumatic past reawakened by a terrifying threat…

Adrian Rizzo was seven when she met her father for the first time. That was the day he nearly killed her—before her mother, Lina, stepped in.

Soon after, Adrian was dropped off at her grandparents’ house in Maryland, where she spent a long summer drinking lemonade, playing with dogs, making a new best friend—and developing the stirrings of a crush on her friend’s ten-year-old brother. Lina, meanwhile, traveled the country promoting her fitness brand and turning it into a billion-dollar business. There was no point in dwelling on the past.

A decade later, Adrian has created her own line of yoga and workout videos, following in Lina’s footsteps but intent on maintaining creative control. And she’s just as cool-headed and ambitious as her mother. They aren’t close, but they’re cordial—as long as neither crosses the other.

But while Lina dismisses the death threats that Adrian starts getting as a routine part of her daughter’s growing celebrity, Adrian can’t help but find the vicious rhymes unsettling. Year after year, they keep arriving—the postmarks changing, but the menacing tone the same. They continue after she returns to Maryland and becomes reacquainted with Raylan, her childhood crush, all grown up and as gorgeously green-eyed as ever. Sometimes it even seems like the terrifying messages are indeed routine, like nothing will come of them. Until the murders start, and the escalation begins…

I’ve not been a fan of Nora Roberts for a super long time like some of her fans, but since giving her books a try- I just can’t stop reading her romantic suspense type books! 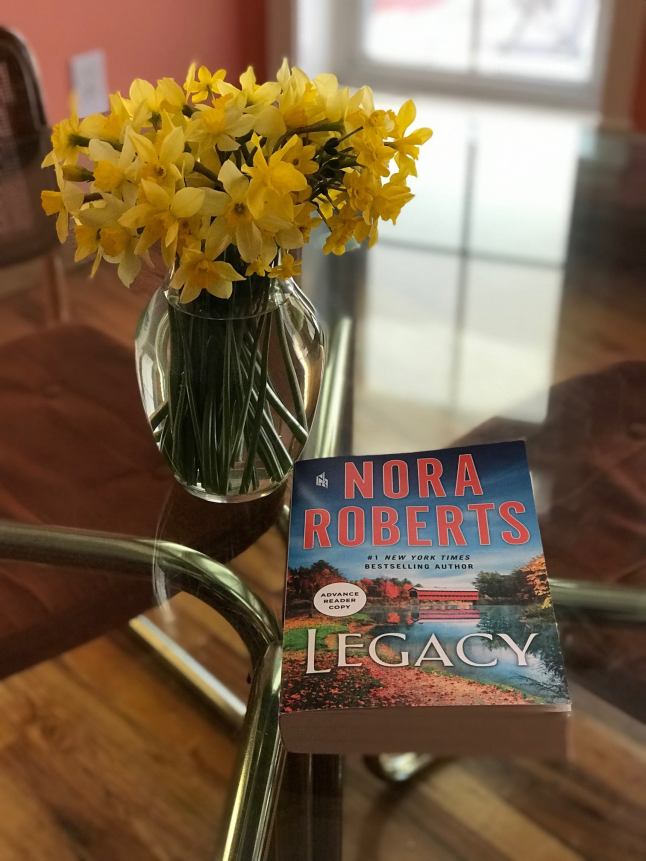 Oh that cover is SO gorgeous. I love the colors!

Adrian. She was so strong and determined and I loved her style- she wanted the best for people she loved, because she knew they deserved the best. Her heart was her biggest muscle (and that says a lot because she enjoyed working out!)

The energy of this book. These people, through connections, made a family, a legacy- not by being blood related necessarily- but by being a family of choosing.

*Have you added Legacy to your TBR list yet?*